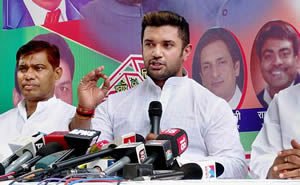 The Lok Janshakti Party (LJP) on Tuesday revealed discontent in the National Democratic Alliance (NDA) about the seat-sharing formula devised by the senior partner BJP for the upcoming Bihar elections.

After late night parleys with the BJP President Amit Shah, LJP MP Chirag Paswan said, “There is no anger but some discontent… There was a difference between the seat sharing formula that was discussed with the allies earlier and what was announced yesterday. We were shocked. There is no smoke without fire,” said the MP from Jamui, Bihar who is also the Chairman of the LJP Parliamentary Board.

Playing down the “discontent”, Union Minister Prakash Javdekar later said that such statements are common at the time of seat allocation. “Some heartburn inevitably follows seat distribution in every election. But these issues are being ironed out. There is no problem with the alliance. The NDA is united,” said Javdekar.

However, LJP leaders said there was a feeling in the party that Hindustani Awam Morcha (HAM) Secular of former chief minister Jitan Ram Manjhi and RLSP of Union minister Upendra Kushwaha had got a “better deal” which was disproportionate to their political clout in the state.

BJP chief Amit Shah had yesterday announced a seat sharing formula for Bihar assembly elections under which the alliance spearhead will contest 160 of the state’s 243 seats, LJP 40, RLSP 23 and HAM 20.

Chirag, who is also the son of Union Minister Ram Vilas Paswan, had a midnight meeting with Amit Shah on Monday to iron out the differences. He said the BJP chief told him there are certain “compulsions in coalitions”. He also said that the BJP chief assured him that he will try to accommodate the concerns of the LJP “as much as possible“.

“We have apprised the BJP chief about our concerns. We are happy that our concerns have been honoured and we are moving towards a solution,” Chirag said.

Union Minister Dharmendra Pradhan had earlier called on the LJP chief after which he downplayed the reports of continued differences, saying NDA accords due respect to suggestions of Paswan.

“Ram Vilas Paswan ji a leader of stature,” he said, recalling that leaders of all NDA allies had yesterday said they would work together to ensure the victory of the ruling alliance in Bihar assembly polls.

“There was no such demand (about more seats)….Nobody said any such thing (when Shah announced the seat sharing pact),” he said when asked whether the LJP was angry as it wanted more seats.

Chirag said the LJP had made it clear as far back as in June that it will oppose projection of former MLAs of Manjhi’s party, who were earlier associated with LJP but defected later. They include former state LJP chief and minister Narendra Singh’s two MLA sons Ajay Pratap (Jamui) and Sumit Kumar Singh (Chakai), both part of Chirag Paswan’s Jamui Lok Sabha seat. Singh had split LJP in 2005 and walked away with around a dozen MLAs.

The LJP Parliamentary Board chairman said his party continues to have reservations over these people.