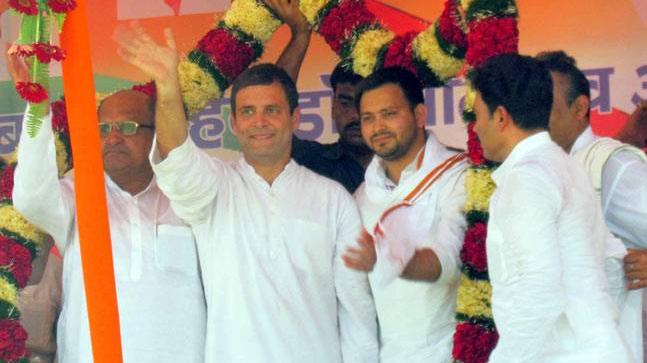 Even as all eyes are set on how the NDA resolves the thorny seat-sharing issue, the rival Mahagatbandhan in Bihar is busy stitching a rainbow coalition to defeat the BJP-led combination in the 2019 general elections.

Efforts are on to cobble up unity and distribute 40 Lok Sabha seats among Mahagatbandhan rainbow coalition partners comprising the RJD, the Congress, the NCP, the HAM (Hindustani Awam Morcha), the Left and Sharad Yadav.

Senior leaders of the constituent parties have been meeting away from the media glare to discuss seat sharing among them based on “realistic” ground level strength of a party in a constituency, sources in the RJD, Congress and HAM of former Chief Minister Jitan Ram Manjhi said.

Sources insisted that “in all likelihood” the Rashtriya Lok Samata Party (RLSP) of Union minister Upendra Kushwaha would be part of the Mahagatbandhan.

Kushwaha, Union Minister of state for HRD in the Narendra Modi cabinet, had not responded to an overture of RJD leader Tejashwi Yadav to join them. But, the sources insisted Kushwaha would ultimately move to their camp.

Sources said as per talks so far, out of the 40 Lok Sabha seats in Bihar, Lalu Prasad’s RJD would have almost half of them.

The Congress would get 10, HAM and RLSP 4 each, NCP and Left would get one seat each. Veteran socialist leader Sharad Yadav may field his son on RJD symbol from Madhepura, they claimed.

The Congress is seeking more seats claiming that its support base has increased in the state after the 2015 Assembly election.

“The Congress wants to field its candidates on more than 12 seats it had fought in 2014 in alliance with RJD,” its state chief spokesman H K Verma said, adding this was based on the fact that its support base had expanded now.

Senior Congress leader Ashok Gehlot, during his meeting at BPCC headquarters in Patna on July 12, faced a demand by some leaders like Rajya Sabha MP Akhilesh Singh that the party should insist on a respectable seat-sharing formula and not remain content with whatever was left over by the RJD.

Following this Gehlot had said it was a “majboori” (compulsion) for the party to hold talks with parties like the RJD and earlier with the JD(U) for an alliance in Bihar and batted for strengthening the party so that it could win elections on its own.

The RJD had hit back, saying they were themselves worried about the “bad shape in which the Congress is”.

Even HAM is eyeing for a fifth seat.

The sources said that former JNU President Kanhayia Kumar might be fielded as a Left party candidate from his native Begusarai constituency.

NCP general secretary Tariq Anwar might be repeated from his Katihar seat.

RJD spokesman Mritunjay Tiwari said that “there is no ‘kitch-kitch'(rumbling) on seat-sharing which would be sorted out by senior leaders of the constituents.”

As per the arrangements in the Mahagatbandhan in 2014, the RJD had contested 27 seats while Congress had put up nominees at 12 places and NCP I.

The RJD, which relies on “M-Y” (Muslim-Yadav) support base, had managed to win four seats then while the Congress bagged two and NCP’s Tariq Anwar emerged victorious from Katihar.

The NDA camp had maximum numbers with BJP winning 22, LJP 6 and RLSP 3. The JD(U) with two seats has joined them now.

But, out of the four seats won by the RJD, Madhepura MP Rajesh Ranjan alias Pappu Yadav left it to float his own Jan Adhikar Party (JAP).

The Araria seat orginally won by Mohammad Talimuddin is represented by his son Sarfaraz Alam now after his death. In addition, Lalu Prasad’s party has its representatives from Bhagalpur and Banka seats.

The Congress has its MP in Ranjeet Ranjan (wife of Pappu Yadav) from Supual and Mohammad Asararul Haque from Kisanganj.

The RJD ranked second on 20 seats in Bihar in the last Parliamentary poll, while the Congress had ended as runners up in 8 places. The HAM is a new entrant in the camp.

Its chief and former chief minister Jitan Ram Manjhi had walked out of the NDA on the eve of the Araria Lok Sabha bypoll early this year and joined hands with Lalu Prasad’s party.

Both Manjhi and Kushwaha have felt marginalised after re-entry of Chief Minister Nitish Kumar’s party JD(U) in the NDA camp following disintegration of the Grand Alliance ministry last year.

Former state Assembly speaker Uday Narayan Chaudhary, who has left Nitish Kumar, is moving in the company of RJD and former Union minister Yashwant Sinha, who quit the BJP, is also with the Mahagatbandhan and could be fielded by the RJD.

After ice breaking breakfast and dinner meetings with BJP president Amit Shah in Patna on July 12 last, Chief Minister Nitish Kumar had exuded confidence that the seat-sharing proposal would come from the BJP in four-five weeks.

The NDA in Bihar comprises the JD(U), the BJP, the LJP and the RLSP.