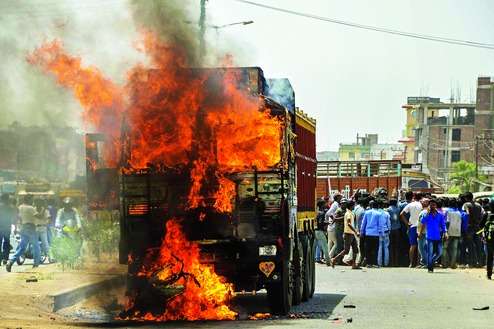 Patna: A mob set a truck on fire and pelted other vehicles with stones on the Patna-Gaya road in Patna rural on Thursday after a truck killed a teenaged girl.

The speeding truck knocked down the girl, who was on a scooter, near Dasratha on the Patna-Gaya road through Parsa Bazar.

The girl, who was on her way to Kankerbagh from her village, died on the spot due to severe injuries to her head and excess bleeding.

She was identified as Priti Bharti, a resident of Beur locality on the outskirts of the state capital.

Her father, Vinod Kumar, is an excise inspector posted in Nawada district.

Agitated over the death, a group of residents protest-ing against rampant rash driving blocked the road near Dasratha and paralysed traffic.

The protesters torched a truck and pelted about half-a-dozen other vehicles with stones to vent their ire.

“Travelling on the Patna-Gaya road through Parsa Bazar is unsafe. The road is accident-prone. Not a single day passes without any accident,” said Satish Kumar, (25), a resident of Varuna village in Patna rural.

The police had to lathicharge to disperse the protesters, who had blocked the road with the girl’s body, bringing vehicular movement on the stretch to a standstill.

“The truck has been seized and efforts are on to nab the driver who managed to escape after the accident,” he added.