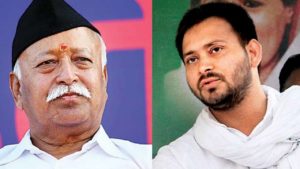 “Mohan Bhagwat recently came to Bihar for 14 days. In these 14 days, he gave training on how to incite riots during Ram Navami. Now people are getting to know about the agenda of his Bihar visit,” claimed Tejashwi Yadav.

In recent days, there have been increasing incidents of communal violence in some parts of the state.

Last week, the situation became tense when rioters set ablaze more than 20 shops and pelted stones at those participating in a Rama Navami procession through Nawadih Colony.

Nearly 50 shops near Jama Masjid located on Old GT Road were torched by rioters, while nearly 60 persons, including 20 policemen were injured due to stone pelting by miscreants.

The situation further intensified on Monday, which thereby led to a curfew being imposed in the vicinity.

Union Minister of State for Home Hansraj Ahir has blamed Bihar governments for communal violence in the state on Ram Navami while saying that it was their responsibility to maintain law and order.

A week earlier, communal violence had erupted in Bhagalpur over playing of loud music during a religious procession which was being led by Arijit Shashwat, son of Union Minister Ashwini Kumar Choubey.