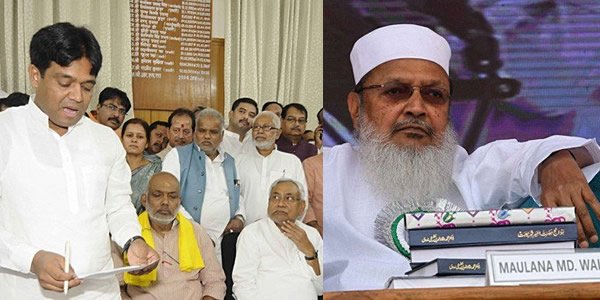 Till April 15 evening, Maulana Wali Rahmani, general secretary of the All India Muslim Personal Law Board, was the darling of the crowd at Patna’s Gandhi Maidan. The AIMPLB and Emarat-e-Shariah Phulwarisharif had jointly organised the ‘Deen Bachao, Desh Bachao’ conference in Patna on that day. However, within 48 hours of the conference ending, Wali Rahmani had fallen from grace. Many of those who were praising him to the skies are now heaping abuse on him on social media and in various gatherings.

“Itna sasta sauda kar liya (what a cheap deal they made),” commented a man who had worked day in and day out for weeks, spending money from his own pocket to make the rally a success. His comments were in context of Khalid Anwar, a close associate of Rahmani, being nominated for the Bihar Legislative Council by Chief Minister Nitish Kumar’s party Janata Dal (United) on April 15 itself, the same day of the rally. His was not an isolated reaction.

Muslims are upset at the perceived ‘deal’ made by Wali Rahmani and Emarat-e-Shariah with the ruling JD(U) in Bihar. Muslims had travelled from across Bihar, Jharkhand and Odisha in response to the call to discuss issues considered important to the community, such as the Modi Government’s Triple Talaq Bill. Now, after JD(U)‘s immediate move to make rally co-organiser Anwar an MLC, upset Muslims are feeling used and targeting their anger at Wali Rahmani, who is witnessing a rapid fall from grace. The ‘Deen Bachao, Desh Bachao’ rally is widely perceived among Muslims to have been more for the benefit of Nitish Kumar and the JD(U), than the Muslim community.

When journalists like Abdul Qadir of The Times of India and Naiyer Fatmi (formerly with Qaumi Awaz) and Prof Mohammad Sajjad of Aligarh Muslim University were earlier repeatedly questioning the purpose and timing of the rally, they were pilloried on social media. But on April 17, a senior journalist associated with a prominent Hindi daily rang up this correspondent to concede that he was proved wrong. He said he had stoutly defended the rally at all platforms, “but today I acknowledge that I was wrong. From now onward I have decided to expose all the designs of the so-called leaders of the community.” He said that he was shocked to see that no mention of communal riots in Bihar was made at the rally, and that Chief Minister Nitish Kumar was praised by none else but Wali Rahmani. JD(U)’s nomination of Khalid Anwar as MLC has exposed everything, he said.

A famous Muslim surgeon of Bihar was extremely upset with Rahmani when Emarat-e-Shariah announced the decision to hold the rally. However, he did not find enough courage to speak out against it at the time, as the stated purposes of the rally, such as discussion on issue of Triple Talaq, were important to the Muslim community.

Dr Abbas Mustafa, another noted surgeon of Patna, said that one good thing which came out of the rally is the joint community efforts made by Muslims. “The rally was well attended and showed that the community can rise to the occasion.” However, he too was upset over the way the way the whole show was hijacked by Nitish Kumar’s agenda.

Mahendra Yadav, one of the 15 convenors of the National Alliance of People’s Movements (NAPM), was also confused over the way things turned out after the rally. However, he appreciated the call for an alliance among Muslims, Dalits and OBCs as given by the national president of the All India Backward and Minority Employees Federation (BAMCEF), Waman Meshram, during his 42-minute long speech in the rally.

On the other hand, Janata Dal (United) is busy weighing the pros and cons of its move to nominate Khalid Anwar to the Bihar assembly’s upper house, as he was a little known name in the party who had only joined it recently. Nitish Kumar has sacrificed senior leaders of his party to make Khalid an MLC. The chief minister will certainly seek his pound of flesh from Emarat-e-Shariah at an appropriate time.