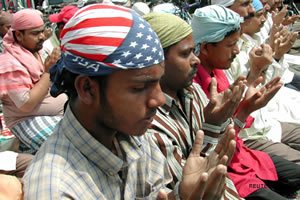 Patna: Abdul Sattar rolls ‘bidi’ in a dingy lane of Muslim-dominated Shahganj locality from early morning till dusk, like many of his family members. But this 43-year old father of three has been taking time off to go to the polling station and cast his vote without fail for the past 24 years. Earlier, party or candidate determined who he would vote for. It’s not going to be so this time, however.

“I will vote for the candidate who is able to defeat BJP and halt Narendra Modi no matter which party he belongs to. I don’t know who that person will be, but will take a conscious decision before pressing the button on EVM,” said Sattar, a matriculate.

Sattar is not the only one thinking on this line. Among the community, this feeling is getting stronger with the passage of every day. “This is also how the intellectual class and Muslim bodies are thinking and they agree that there should be tactical voting to ensure the win of a secular and winnable candidate in each constituency,” said Maulana Anisur Rahman Qasmi, general secretary of Phulwarisharif-based Imarat Shariah.

Muslims constitute 16% of the population in Bihar and are numerically strong enough to tilt the balance in favour of a particular candidate in about 12 of the 40 constituencies in the state.

A move has been initiated by Jamiat Ulema-e-Hind chief Maulana Arshad Madni, suggesting that Muslim organizations should bury their socio-religious differences and join hands to effectively check the division of secular votes. Jamiat’s state unit head Husn Ahmad Qadri said he had spoken to leaders of various bodies and they were in full agreement with the strategy to ensure unity among the secular votes and not merely the Muslim votes.

“The problem is that when a so-called wave is projected, a large section of the society gets united but such a unity is rare in the Muslim society. Muslim unity in an election can make a big difference,” said prominent clergy Maulana Syed Shamim Ahmad Munami of Patna City. But he wondered who is secular and who is not. He said many leaders who had been flaunting secular tag recently joined the saffron party. He also took a dig at so-called secular parties and said it was only during the election that they come to plead for votes in the name of secularism.

However, Munami feels Muslim voters will unite in this election at least in some constituencies, if not at the national level. “The community will definitely take a lesson from past and not repeat the blunders it committed earlier,” he said while quoting a Hadith that a person must be careful not to be bitten twice in the same hole.

Maulana Qasmi recalled some Muslim candidates, who were in a winning position during the 2009 Lok Sabha election, lost because of the division in Muslim votes among candidates belonging to the community. He cited the case of Madhubani and said the Muslims must realize who was really in the contest and support him instead of wasting their votes.

“People are getting aware of this reality and will opt for tactical voting this time instead of wasting their votes,” said eminent surgeon Dr A A Hai. “The election of secular public representatives is the need of the hour and the issue concerns not only the Muslims or other minority communities but the entire nation. This country has survived on the principle of secularism for over 3,000 years and will hopefully survive for another 3,000 years because secularism is the DNA of India,” said Dr Hai who is also active in socio-educational fields.