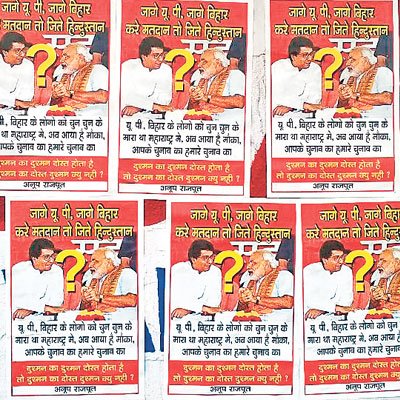 The posters came up in areas populated by migrant workers from north India, urge voters to think before voting for BJP.

The posters show Narendra Modi and Raj Thackeray engrossed in a conversation.

“Dushman ka dushman dost hota hai…toh dushman ka dost dushman kyun nahi?” (An enemy’s enemy is a friend, then why should an enemy’s friend not be an enemy?),” the posters questioned.

“While Narendra Modi speaks of national unity and brotherhood, he never criticised Raj Thackeray, who initiated the hate campaign against north Indians in Mumbai and Maharashtra. Moreover, Thackeray was treated as state guest during his visit to Gujarat,” Rajput told dna.

The BJP, however, criticised the Congress for putting up such posters.

“Congress is unable to digest Narendra Modi’s popularity and is using such tactics to tarnish his image. But, it will never succeed in its,” CR Patil, BJP MP from Navsari said.

The Surat BJP later claimed that it has filed a complaint with Election Commission against Rajput for putting up the posters.

The authorities say that they have begun a probe in the case.

Thackeray and the MNS have frequently targeted north Indians, especially those from Bihar, accusing them of taking away jobs meant for Maharashtrians.