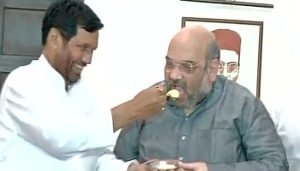 New Delhi/Patna: The National Democratic Alliance (NDA) is reported to have reached an understanding on Saturday over distribution of seats for the Bihar Assembly Elections.

As per reports, the Bharatiya Janata Party (BJP) will contest 162 of the total 243 Assembly seats.

Ram Vilas Paswan’s Lok Janshakti Party (LJP), on the other hand, will contest on 41 seats, as per sources. The two parties had reached an understanding on seat-sharing last night after a meeting between Paswan and BJP president Amit Shah.

Later in the evening today, NDA allies are due to meet after which a formal announcement on seat-sharing is expected.

“Ho gaya hai, shaam ko bataenge [Agreement (on seat-sharing) has been reached, announcement will be made in the evening],” BJP leader Ananth Kumar said today.

Bihar goes to polls beginning next month in a five-phase election from October 12 to November 5.