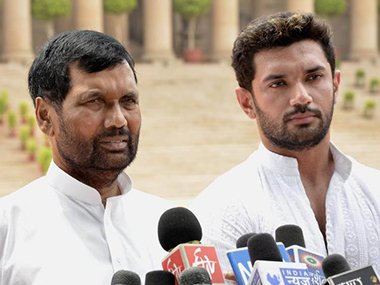 PATNA: Lok Janshakti Party (LJP) chief and Union minister Ram Vilas Paswan on Saturday echoed the tone of his son Chirag Paswan, saying NDA, which suffered a setback in Bihar and UP by-elections, should follow its ‘sabka saath sabka vikas’ slogan in letter and spirit.

“NDA needs to take along all sections of the society. Congress also ruled the country for several decades by building an inclusive society,” Paswan told reporters at Patna airport.

He said the defeat of BJP in Phulpur and Gorakphur Lok Sabha byelections in UP was a cause for concern. He, however, attributed BJP’s loss in Araria parliamentary constituency in Bihar to sympathy for RJD’s Taslimuddin, whose death necessitated the bypoll.

Asked about TDP’s exit from NDA, Paswan said had the Centre accepted Andhra Pradesh’s demand for special category status, the agitation would have spread to Bihar.

“Everyone is free to go wherever they want, but LJP is with NDA,” he said. On Friday, Chirag Paswan had said the BJP should rework its strategy following its defeat in UP bypolls.