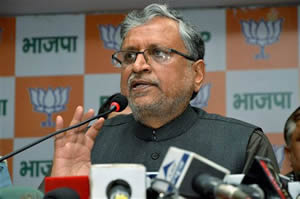 Bihar Deputy Chief Minister Sushil Kumar Modi today said the comments of Niti Aayog CEO Amitabh Kant on the backwardness of the state were targeted at the 15-year-long disruption of progress when the state was ruled by the RJD.

“It is known to all that the 15 years of RJD rule in Bihar was marked by politics of casteism. Development had come to a standstill during the period. Potholed roads of the state had become an object of national ridicule,” the senior BJP leader tweeted.

“In the last budget presented by Lalu-Rabri regime, the budgetary outlay for social and physical infrastructure was a paltry Rs 1,205 crore while we have allocated Rs 32,581 crore for the same in the budget for 2018-19,” Sushil said.

“It is the NDA government which deserves credit for a double-digit growth rate in the state. The statement of the Niti Ayog CEO was on the backwardness suffered by Bihar during the previous regime. It was not a comment on the performance of the present government,” the Deputy CM said.

Sushil Modi’s office also made available to the media here a statement by Kant, wherein the Niti Aayog CEO said “certain reports in the media have misconstrued my statements regarding the state of Bihar”.

Delivering a lecture at the Jamia Milia Islamia University in Delhi yesterday, Kant had said “eastern part of India, states like Bihar, UP, Chhattisgarh, Madhya Pradesh and Rajasthan, are keeping India backward especially on social indicators”.

The RJD had latched on to Kant’s statement, flaying Bihar Chief Minister Nitish Kumar and his ally, the BJP, which is in power in the other states named by the Niti Aayog CEO as well as at the Centre.

“So he means so called Bihar model of Nitish Kumar is hoax and forged”, leader of the Opposition in the state Assembly Tejashwi Yadav had tweeted, pointing out “Nitish Kumar and BJP are 18 years old ally and ruling Bihar for last three years”.

At a function here earlier in the day, Kumar had said – in an apparent rebuff to Kant’s statement – that Bihar was making progress despite being in need of more assistance and that the state had historically suffered from discrimination on account of its active participation in the Revolt of 1857 which was the first battle for freedom from the British Raj.

In a statement issued yesterday, Gupta had said “this kind of statement not only insults Bihar but undermines the efforts of the entire Hindi heartland towards national growth. We must know that Bihar and UP were subjected to adversarial treatment by British as compared to other states”.

“We would appeal to the Prime Minister that he (Kant) be immediately sacked…It does not augur well that an important lieutenant of the government is speaking with an undertone of division and discrimination at a time when the nation needs empathy and integration more than ever”.