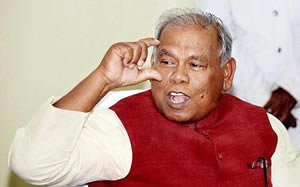 Patna: Former Bihar Chief Minister Jitan Ram Manjhi has alleged that the Bihar government headed by Nitish Kumar is “shedding crocodile tears” on Dalit issues and said that the state has an abysmally low rate of conviction in cases lodged under the SC/ST Act.

Claiming that a number of steps aimed at the welfare of Scheduled Castes (SCs) and Scheduled Tribes (STs) were taken during his brief tenure, Mr Manjhi claimed the chief minister’s recent pro-Dalit stance was “aimed at deriving political mileage at a time when the Lok Sabha elections are just a few months away”.

“A total of 25,943 cases, lodged under the SC/ST Act, was pending in Bihar till 2017. Out of these, convictions were made in only 89, which is a mere 0.34 per cent. Nitish Kumar has been the chief minister for over a decade. The statistics speak volumes about his commitment towards the depressed classes”, Mr Manjhi told reporters in Patna yesterday.

Mr Manjhi became the chief minister in 2014 when Nitish Kumar resigned owning responsibility for the debacle of the JD(U) in the Lok Sabha polls. He stepped down less than a year later and floated his own party Hindustani Awam Morcha or HAM.

The party contested the state Assembly elections a year later as a constituent of the NDA, but performed poorly with Mr Manjhi emerging as the sole candidate to win a seat. However, less than a year after Nitish Kumar’s return to the NDA, Mr Manjhi switched sides and joined the truncated Grand Alliance comprising the RJD and the Congress.

His son Santosh Manjhi was elected to the state legislative council with the RJD’s support last week.

The former Chief Minister’s outbursts came in the backdrop of Nitish Kumar declaring that all people belonging to the Scheduled Caste would enjoy the benefits extended to “Mahadalits”, his recent emphasis on timely disposal of cases lodged under the SC/ST Act and approval of a scheme by the state cabinet for economic uplift of those traditionally involved in manufacture and sale of country made liquor and toddy.

A vociferous critic of Nitish Kumar’s prohibition policy, Mr Manjhi has been alleging that the ban on alcohol in Bihar has hit the Dalits hard as most manufacturers of country made liquor and toddy belong to the community.

Mr Manjhi, along with the RJD, has also been alleging that most people arrested and awarded punishment by courts under the stringent anti-liquor law that came into force in 2016 were from the depressed classes.

“The government is shedding crocodile tears with a view to gaining the sympathy of the sizable Dalits ahead of the general elections due next year. This is yet another example of the NDA’s anti-Dalit mindset”, he claimed.