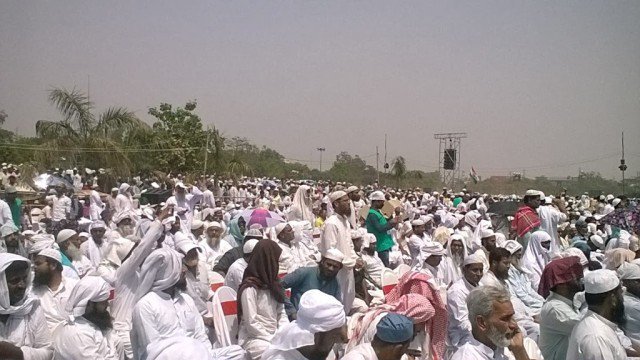 Two simultaneous political developments favouring Nitish Kumar appear to have dampened the spirit of Muslims who travelled from across Bihar to attend the ‘Deen Bachao, Desh Bachao’ rally

Judging by attendance alone, the ‘Deen Bachao, Desh Bachao’ (Save Religion, Save Country) rally in Patna on April 15 was no doubt successful. But whether Patna-based Emarat-e-Shariah Phulwarisharif, the organiser of the show, had ‘achieved’ its objective or not remains to be seen.

Two almost simultaneous developments appear to have dampened the spirit of Muslims, many of whom travelled from across Bihar in the summer heat to attend the rally, as they initially thought that the cause was dear to them. The rally had ostensibly been organised in wake of the Centre pushing the Triple Talaq Bill.

The first such development was the nomination of Khalid Anwar, who was conducting the rally, by the ruling Janata Dal (United) as its candidate for the Legislative Council election. The timing was very well calculated as the last date of filing of nomination papers was April 16.

This happened despite the repeated claim by the chief of Emarat-e-Shariah, and the general secretary of All India Muslim Personal Law Board Maulana Wali Rahmani, that the rally has nothing to do with politics.

As if that was not enough: Maulana Wali Rahmani, who was presiding over the rally, publicly thanked Chief Minister Nitish Kumar and his administration for making it successful.

These two related developments left average Muslims, who spent so much money and energy to attend the rally, confused. At the end, they appear to have been cheated.

It could not be known just now as to whether Nitish and Wali Rahmani have facilitated or damaged each other. But a cursory analysis would reveal that the Bihar Chief Minister has certainly scored over Emarat-e-Shariah. Nitish’s move to make Khalid Anwar his party’s candidate has questioned the credibility of Emarat-e-Shariah. Was all this exercise done to get a reward, and that too so soon?

Nitish earned a pat on the back from Wali Rahmani, something he needed most from a Muslim leader after a series of riots and his return to the NDA fold tarnished his ‘secular’ image. The rally gave him the opportunity to refurbish his image among Muslims. That is why Janata Dal (United) set up a medical camp near the rally ground. Hoardings of political parties, mostly of JD(U) welcoming the Muslims to Patna, were prominently visible everywhere.

The state government got full opportunity to highlight the schemes meant for minorities at many points, especially near the location of the rally at Gandhi Maidan. All this bonhomie with the JD(U) and its leaders was going on when speaker after speaker were strongly criticising Narendra Modi-led BJP government at the centre for interfering in the Muslim Personal Law.

Before the start of the rally, several Muslims questioned the need for such an exercise and feared that this may cause polarisation. But even they did not realise that the intent of the whole exercise could be to favour Nitish Kumar. The resolutions passed in the rally raised all the issues relating to Muslims, SC, STs, OBCs and other minorities, but it made no mention of the recent riots in Bihar.

Though the resolutions demanded punishment to all those involved in the gang rape cases in Kathua and Unnao, no mention was made about the communal riots in Aurangabad, Bhagalpur, Rosera. This happened despite the fact that Emarat-e-Shariah is essentially a Bihar-based religious and social organisation. Several political observers are of the view that Nitish has taken revenge from Wali Rahmani in a very subtle way for ‘humiliating’ him at a function five and a half years back.

On November 22, 2012, Rahmani, while sharing a dais with the CM in a function in Madrasa Shamshul Hoda in Patna criticised the Bihar government for not allotting land for the Kishanganj branch of Aligarh Muslim University. Those close to Nitish then said that he was very upset with the way Rahmani spoke on the occasion.

Today, the Amir-e-Shariat is unable to fathom whether Nitish is appreciating him or settling scores. The purported issue behind the organising of the rally, which was supposed to be on the Triple Talaq Bill, was nowhere on the scene after Nitish’s master-stroke.