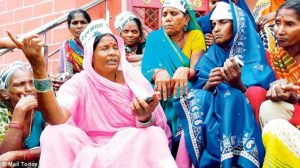 She was once one of the 1,000 women from across the world nominated for the Nobel Peace Prize for her prolonged struggle against the feudal society in Bihar.

This poll season, Tiliya Devi, who had led a campaign to reclaim 156 acres of land belonging to the Dalits from the clutches of powerful landlords, is the Aam Aadmi Party’s candidate from the Jhanjharpur constituency.

The 66-year-old woman from the poorest-of-the-poor Mushhar community is pitted against three formidable candidates.

Sitting MP Mangnilal Mandal, who had won the seat in 2009 on the Janata Dal-United ticket, is contesting on the Rashtriya Janata Dal ticket, while the JD(U) has fielded former Union Minister Devendra Prasad Yadav.

Also in the fray is the BJP’s Birendra Kumar Choudhary. But Tiliya Devi is undeterred.

“I am fighting the polls against the scourge of corruption,” she said.

The senior citizen has been working hard for nearly a month in her the constituency. Until the campaigning came to an end on Monday evening, Tiliya was visiting remote villages of the Yadav-dominated constituency with a handful of her supporters trying to mobilise people on the issue of corruption.

“She has been getting tremendous support from the people, especially those from the underprivileged sections of society,” said Ram Narain, an AAP supporter.

Born into a Mushhar family, Tiliya was married off at 14. But she fought against all odds to raise her voice against bonded labour prevalent in the feudal society.