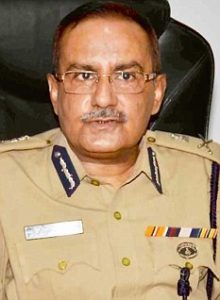 The festering war of words over the legality or otherwise of the Arvind Kejriwal government’s decision to induct five Bihar officers in the Delhi Anti-Corruption Branch (ACB), got another boost, this time from the chief of the Bihar police.

Thakur told HT Saturday afternoon the Bihar government decision to send five officers to the Delhi ACB was lawful and did not violate any section of the police act of 1888, as had been claimed by Meena.

“All five officers sent by Bihar to the Delhi ACB are state officers, not governed by all India service rules. It is a state-to-state matter that does not require the clearance of the central government”, the DGP said.

“Had there been any violation of law, the union ministry of home affairs (MHA) would surely have taken up the matter with the Bihar government. But nothing of this kind has happened”, the Bihar police chief said.

Thakur sought to substantiate his position by pointing out that many a times a state government gave constables and junior police officers to the CBI on five-year deputation, without the MHA coming into the picture.

“I don’t expect the MHA to raise any objection on the issue at hand. But if there is a communication from them on the subject of Bihar loaning its officers to the Delhi ACB, we will examine the same and furnish a suitable reply”, the DGP stated.

Thakur’s firm stand was spelt out in the wake of a report saying Meena had requested the intervention of Delhi Lieutenant Governor Najeeb Jung to facilitate the reversal of the Bihar officers’ deputation to the Delhi ACB.

As per a news agency report, Meena has written to the L-G saying that appointment of five Bihar police officials in the ACB by Delhi government were in violation of section 3 of the Police Act, 1888.

Under the act, Meena was reported to have argued, the transfer and posting of police officers between two states required approval from the central government.

Meena, the agency report said, had conveyed to Jung that neither the Delhi government nor the Bihar government had approached the Centre for approval in this matter.

It said Meena had also sought interference of LG in informing the Union Home Ministry and taking action in this regard saying that the appointments were done in an unconstitutional manner.

Five officers of Bihar Police had recently joined Delhi government’s ACB on special request of the AAP regime to its Bihar counterpart.
Delhi Police and ACB have recently come face to face after some Delhi police personnel were arrested by the anti-graft unit for allegedly accepting bribe.

The Delhi ACB, which is probing a number of high-profile cases, was barred from registering any case against the officers and political functionaries of the central government, which included the Delhi police, which works under the MHA.

However, the high court held that the anti-corruption branch of the NCT government had the jurisdiction to arrest policemen, while dismissing the bail application of a head constable, who was arrested by the ACB in a corruption case.

The matter is currently pending in the Supreme Court.