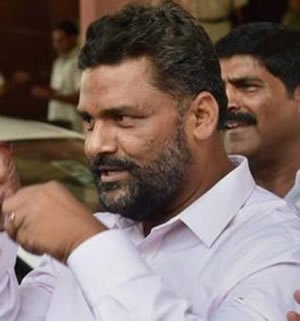 He may be without a party but Pappu Yadav alias Rajesh Ranjan believes he isn’t without “vichardhara (ideology)”. It’s this vichardhara, says the MP from Madhepura in Bihar, that led him to protest when he realised RJD leader Lalu Prasad would pass on his political legacy to one of his sons, an act of defiance that eventually led to his expulsion from the party.

With Yadav expected to announce his new party on Tuesday, all bets are off on where this vichardhara will lead him. His options are limited — go with the JD(U) (but with JD(U) and RJD announcing a formal tie-up for the Assembly elections, that has been almost ruled out), go with the Congress (his wife’s party but which has little presence in the state) or go with the BJP, directly or by joining hands with former Bihar chief minister Jitan Ram Manjhi’s Hindustani Awam Morcha. On Monday, a day ahead of the announcement, the last option seemed most likely. “BJP just needs to keep leaders like Sakshi Maharaj and Yogi Adityanath at bay. Let courts decide on controversial issues. I am open to working with any party,” he said in Patna.

In an earlier interview with the Ranjans at wife Ranjeet’s official bungalow on 7, BR Mehta Lane in Delhi, she joked: “If he joins the BJP, ladai hogi.” “Ghar mein nahin, Parliament mein,” clarified the 47-year-old Yadav in all earnestness.

After his expulsion from the RJD, Yadav has been criss-crossing Bihar, holding rallies and going on padyatras while openly taking on his one-time mentor Lalu. “Have you ever heard of any leader openly announcing his uttaradhikaari (successor)? Look at Rahul Gandhi and Akhilesh Yadav… They are sons of leaders, but their parents didn’t anoint them before they did any work… I don’t have a problem with dynasty politics.”

Yadav has a history of shifting from one party to the other — LJP, SP and RJD — winning seats for each of these parties in different Lok Sabha elections besides one as an Independent.

But now that he has been without a party, he said, he has been doing some “introspection”. The result of which is sweeping: “sare politicians chor hain”, “political parties think corruption is our birth right…”, the “system is run by dalals” and then, the ultimate Lohiaite argument, “the system is for caplitalists, not for the aam aadmi”.

“The youth of Bihar are tired of this ghisi piti politics… tired of seeing Lalu, Nitish, Paswan, Sushil Modi… They have got a chance now,” he said.