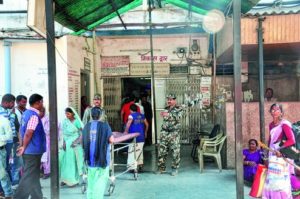 PATNA: Bihar Chief Minister Nitish Kumar on Monday inaugurated and laid foundation stones for a total of 301 medical-related infrastructural projects worth Rs 784 crore and announced that state capital-based all three major medical institutions namely PMCH, NMCH and IGIMS would be upgraded with addition of new buildings, equipment, beds and other infrastructures to accommodate more patients.

Addressing a gathering after inaugurating and laying foundation stones for the projects through a remote control at Samvad auditorium here, Nitish also said that the 1,700-bed PMCH would be upgraded into a 5,000-bed ‘world-class hospital, while number of beds in the NMCH would be increased to 2,500 from the existing 750 and in the IGIMS to 2,500 from existing 500 beds.

After viewing the presentation, CM said, “Once upgraded, the PMCH would be the first 5,000-bed hospital in the world. A hospital having 5,000 beds exist nowhere across the globe.”

“I am happy from core of the heart to learn that health department is going to begin works on upgrading PMCH into world-class hospital,” he said and asked the health officials to upgrade the hospital in 5 to 6 years instead of proposed 8 years.

He said the PMCH’s upgradation work would be completed in three phases. “Demolition of existing buildings and shifting of beds and medical facilities would be carried out in such a manner that there would be no adverse impact on day-to-day functioning of the state’s premier hospital,” Nitish said.

CM said as per the upgradation plan there would be multi-storeyed buildings to increase number of beds and accommodate more medical facilities. Separate multi-storeyed buildings would be constructed for residences of doctors and other medical staff in the same campus. There would be three multi-level vehicle parking lots having direct access from Ashok Rajpath and Ganga Path through separate flyovers.

Earlier, health department’s principal secretary Sanjay Kumar assured the CM that his department was taking all necessary steps under the guidance of health minister to provide necessary health care to people across the states.