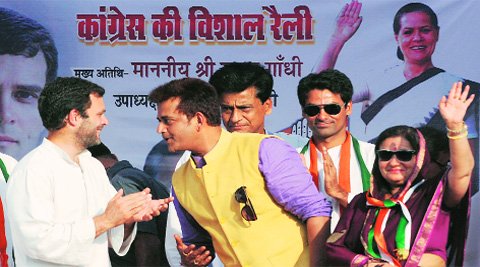 Speaking at the Ramlila Ground in Pratapgarh Lok Sabha constituency, Rahul told the gathering how the Shiv Sena, which is part of the NDA, had forced people from UP and Bihar to leave Mumbai.

“I recently went to Mumbai, where a person like you caught hold of my hand and told me he was being forced to leave the place by the Shiv Sena, which is part of NDA. You have to tell them that people of UP and Bihar cannot be suppressed,” he said. He added, “We believe the country is one and you should be able to have a home in Maharastra or anywhere across the country.”

Taking on Modi, he said, “The country is not run by a single person. They talk of Gujarat. Gujarat has been made Gujarat by women there, Amul is result of people of Gujarat. They believe in taking the strength of people and putting it behind an individual, whereas we believe in giving strength to all.”

Listing the UPA’s achievements, Rahul spoke about the Right to Education, Food and Information. “They (BJP) talk of corruption but three ministers in Gujarat government have been to jail. Similar is the scene in Karnataka, Chhattisgarh and Madhya Pradesh. I accept they have taken a lead in marketing themselves, but you have to see that we have taken a lead in work,” he said.

He also claimed the opposition was trying to polarise voters. “Election has come and people are trying to divide you. I visited Muzaffarnagar after the riots and Muslims told me they had no enemies there. Instead, people from outside had instigated the riots,” he said. Talking of providing jobs to the youth and 50 per cent reservation for women in Parliament, he said, “If the Congress comes to power here and at the Centre, people from Maharastra, America as well as London would come here seeking employment.”

The Congress vice-president will address his first election rally in West Bengal on March 25.