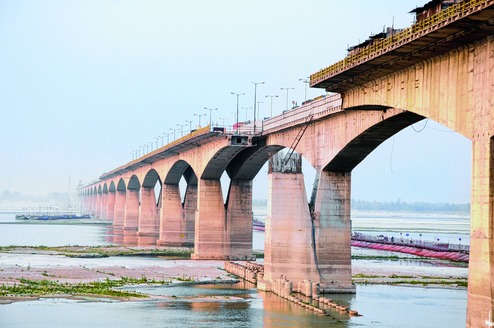 Patna: After the ban on heavy vehicles on the dilapidated Gandhi Setu, railways have now asked truck operators to use train service to send goods from south to north Bihar and vice-versa.

With this service, truck operators will be able to send sand, stone chips, brick, thermo-mechanically treated (TMT) bars and other goods from one place to another via the Digha-Sonepur rail-cum-road Bridge.

At present, truck operators are facing hardships after the ban on heavy vehicles on Gandhi Setu. They are forced to take longer routes. As a result they are facing large-scale revenue losses.

“Railway can play an important role in providing an alternative to truck operators, as they are facing difficulties after the ban on heavy vehicles on Gandhi Setu,” ECR chief public relation officer (CPRO) Rajesh Kumar told The Telegraph.

“So our ECR general manager has asked the senior divisional managers of all five divisions to start goods train as soon as possible to provide relief to the truck operators.

Trivedi convened a meeting with the five senior divisional managers – Vineet Kumar (Danapur), Dayanand (Mughalsarai), Ashish Kumar (Dhanbad), Akhilesh Pandey (Sonepur) and Birendra Kumar (Samastipur) – and asked them to take necessary steps. After the ban on heavy vehicles, trucks take the Ara-Chhapra bridge and then Rajendra Setu in Mokama. But this is not feasible, as it increases distance by over 100km.

The move will also help reduce traffic on the Rajendra Setu (rail-cum-road bridge), which is not in good shape. Though it has become difficult for truck operators, the move has brought big relief to residents passing through Gandhi Setu. Now, vehicles smoothly pass through the 5.575km bridge and there is no traffic congestion as used to happen earlier.

But truck operators were not happy with the railway’s plan. They said the move will further increase their woes. “Truck-owners just dump goods of traders from own place to other in which we earn money,” said Vinay Singh, vice-president of Bihar Truck Owners’ Association.

“In any case, we are not going to benefit from this. Truck operators are already facing problems at the hands of motor vehicle inspectors and mining officers who put heavy penalty on us in cooked up cases of over-loading. Earlier, the railway had started the service of roll on and roll off, in which trucks used to be carried in railway wagons, but the idea failed. Even this idea of railway will not work because it would be very expensive.”