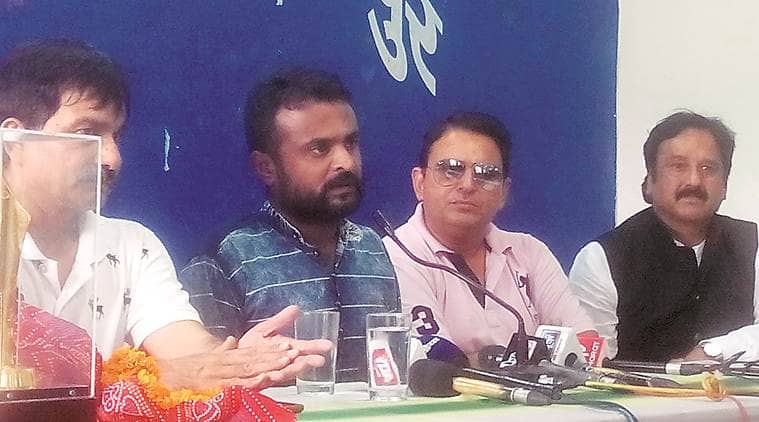 A journalist from Rajasthan’s Barmer district who was kept in a Bihar jail on the basis of a court complaint filed against him alleged on Sunday that he was implicated under a ‘conspiracy’ hatched by politicians.

The journalist, Durg Singh Rajpurohit, told reporters in Jaipur on Sunday that contrary to the charges against him in the complaint, he had never visited Patna. He claimed that he was wrongly apprehended by Barmer police “who did not follow procedures”.

Rajpurohit works for a private news channel and claims to be a journalist for the last 18 years.

“I was summoned to the office of the superintendent of police, Barmer on August 18 and after reaching there, I was arrested by the Barmer rural police. I even questioned the SP as to why I was being arrested without any prior information or chance to get any legal assistance,” said Rajpurohit.

He claimed that superintendent of police Manish Agrawal told him that there was a court notice in his name and showed him a printout of a WhatsApp message.

The court complaint had been filed by a person named Rakesh Paswan, a resident of Bihar’s Nalanda district, with the name of the accused being mentioned as ‘Durgesh Singh’ instead of Durg Singh Rajpurohit, but correctly mentions his father’s name as Guman Singh Rajpurohit.

In the complaint against Rajpurohit under Section 406 (punishment for criminal breach of trust) of the IPC along with sections of the SC/ST Act, it has been alleged that the accused has several businesses and recruits labourers from Patna.

The complaint was filed at the court of the special judge, SC/ST, Patna which had issued an arrest warrant on August 16.

“The accused had taken the complainant (Paswan) to Barmer six months ago where he engaged him in mining work. After the complainant’s father fell ill, he returned to Patna without being paid any remuneration for his work by the accused,” the complaint said.

The complainant further alleged that the accused came to Patna on May 7 and after unsuccessfully tried to convince Paswan to return to Barmer, assaulted him and abused him with casteist slurs.

According to newspaper reports following Rajpurohit’s arrest, Paswan reportedly told the media that he never visited Barmer and also denied filing the case against Rajpurohit.

“I have been framed by highly influential politicians for my work as a journalist. The police harassed me on the way and kept on maintaining that mine was a ‘high profile case.’ I am still getting threats and my life is in danger. Some miscreants fired at me a couple of months ago,” Rajpurohit claimed on Sunday.

He cited a series of stories that he did earlier this year when a woman from Barmer had run away with a man from Jammu & Kashmir and claimed that the stories had not gone down well with some politicians. However, he refused to take any names of people whom he held responsible for him being kept in jail.

He was granted bail Friday after the matter was reported by the media and the intervention of Bihar CM Nitish Kumar. Nitish has ordered an probe under supervision of the inspector general of police, Patna in the matter.

Barmer superintendent of police Manish Agrawal rubbished the allegations levelled by Rajpurohit and said that all routine procedures were followed in the case.

“In its warrant, the court had directed the station house officer of Barmer Rural police station to execute the same. The person was arrested as per the directions of the court and taken to the concerned court. Our job was limited to that. Every procedure was followed,” Agrawal said.