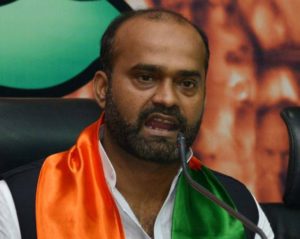 Earlier in the day, Ali rubbished the allegations levelled against him by Naqvi, saying he was ready to be hanged if the charges were proved.

Talking to mediapersons in New Delhi, Ali, whose membership was annulled by the Bharatiya Janata Party (BJP) a day ago, said he believed in the politics of uniting people. The Rajya Sabha member was accompanied by his wife.

“Sabir Ali and his wife dare…Naqvi, threaten to protest if Naqvi can’t back allegations,” a Times Now tweet said. The couple also asked Naqvi to withdraw the allegations.

Ali’s induction and the subsequent cancellation of membership over his alleged terror links have given a jolt to the BJP, which is grappling with controversies pertaining to entry of ‘outsiders’ into the party.

An NDTV tweet quoted Ali’s wife as saying, “(We) Want written apology from Naqvi saab…within 24 hours or want him to provide proof of our relations with Bhatkal.” Another tweet added,”If he fails to do both, I will hold a protest outside his (Naqvi’s ) house.”

Reacting to the charges, Ali said his brand of politics of uniting people could have made some people insecure. He also demanded an apology from Naqvi.