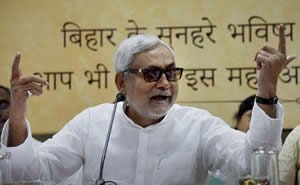 The Supreme Court today dismissed the second PIL filed by a lawyer seeking the disqualification of Bihar chief minister Nitish Kumar from the state legislative council for allegedly suppressing from the Election Commission that a murder case was pending against him.

A bench headed by Chief Justice Dipak Misra expressed anguish over the fact that lawyer M L Sharma, whose earlier PIL on the same issue was dismissed, had moved another one with seeking similar reliefs and had even made the Prime Minister’s Office (PMO) as one of the parties.

“You do not file a properly constituted petition,” the bench, comprising justices Misra, A M Khanwilkar and D Y Chandrachud, said.

“We have already dismissed your petition on the same issue two weeks back after getting the response from the other side,” it said.

Earlier, the apex court on March 19 had dismissed the lawyer’s PIL, saying it lacked merit as a candidate is liable to disclose the pendency of a criminal case only after a court takes cognisance.

The bench had taken note of Kumar’s submission that he had informed the Election Commission of the pendency of the case in 2012 after the court took cognisance of it in 2009.

“The Election rules say that he (Nitish Kumar) should declare it (pendency of criminal case) post cognisance of the case,” the bench had said while dismissing the PIL.

The PIL, filed by advocate Sharma, had alleged that there was a criminal case against the JD(U) leader in which he was accused of killing a local Congress leader Sitaram Singh and injuring four others ahead of the Lok Sabha by-election from Bihar’s Barh constituency in 1991.

The lawyer had sought cancellation of Kumar’s membership of the state Legislative Council in accordance with the Election Commission’s 2002 order that it was mandatory for candidates to disclose criminal cases against them in their affidavits annexed to the nomination papers.

He had claimed that the Bihar chief minister had not disclosed the criminal case pending against him in affidavits since 2004, with the exception of 2012.