BJP President Amit Shah on Wednesday blamed the Congress and the Opposition for the loss of 10 lives during Monday’s Bharat Bandh protests, which were sparked by the alleged dilution of the SC/ST Act by the Supreme Court. The apex court on Tuesday refused to put in abeyance its judgment banning automatic arrests without prior permissions for offences under the Scheduled Castes and the Scheduled Tribes (Prevention of Atrocities) Act, 1989, saying its March 20 order only meant to safeguard innocent people without affecting the rights of the marginalised communities. The court, however, said it would consider the arguments against its judgment from all parties involved at the next hearing that will be scheduled sometime after 10 days. Meanwhile, curfew has been imposed in various areas of Gwalior, Bhind and Morena districts of Madhya Pradesh in the wake of violence witnessed by the state on April 2 during Bharat Bandh.The curfew, though, would be relaxed for two hours between 10 am and 12 noon, according to the police. As many as 5,000 people have been booked for creating ruckus and damaging public and government properties during protests against “dilution” of the provisions of the SC-ST Act in Uttar Pradesh. Senior Superintendent of Police Vaibhav Krishna said police had lodged reports against 5,000 unidentified and 285 named miscreants under various sections the IPC. Till now 32 agitators have been arrested and raids are being conducted to arrest others. The Supreme Court had on March 20 banned automatic arrests and registration of criminal cases under the Scheduled Castes (SC) and the Scheduled Tribes (ST) (Prevention of Atrocities) Act, 1989. Ruling that no arrest could be made under the Act without prior permission, the apex court had also held that a court could grant anticipatory bail if it, prima facie, found the complaint was an abuse of the law, false, motivated and intended to blackmail or harass a person.

Here are the top developments around the so-called dilution of the Act and the Bharat bandh called by Dalit organisations across the country:

2) Bihar Dalit leader demands ‘Harijanistan’: Former Bihar minister and Dalit leader Ramai Ram on Wednesday threatened to raise the demand of “Harijanistan” (Dalit land). “Constitutional rights of Dalits are being snatched from them and their dignity and honour hurt. Dalits cannot live in the country as a second-class citizen. We will demand Harijanistan,” Ram said.

Ram, who is a senior leader of JD-U faction led by Sharad Yadav, said that nine Dalits killed in police firing in the country during the protest against the dilution of SC/ST Atrocities Act should be declared martyr.

He said Dalit icon B. R. Ambedkar also demanded Harijanistan for development of Dalits after India got independent and a separate Pakistan was created “but then top leaders of the country provided special rights to Dalits in place of Harijanistan. Now special rights for Dalits in the constitution are under threat and Dalits are being discriminated everywhere. It will not work anymore,” he said.

The apex court also asked all parties to submit detailed replies within two days. The matter will be heard after 10 days.

4) 5,000 booked, 32 arrested for rioting in Ghaziabad: As many as 5,000 people have been booked for creating ruckus and damaging public and government properties here during protests against “dilution” of the provisions of the Scheduled Caste and Scheduled Tribe (Prevention of Atrocities) Act, the SSP said. Senior Superintendent of Police Vaibhav Krishna said police have lodged reports against 5,000 unidentified and 285 named miscreants under various sections the IPC. Till now 32 agitators have been arrested and raids are being conducted to arrest others.

5) Houses of Dalit MLA, ex-MLA set afire in Rajasthan: The houses of a sitting and a former MLA, both Dalits, were set afire by a violent mob this afternoon in Rajasthan’s Karauli district following which curfew was imposed in the area, a senior official said. A mob comprising nearly 5,000 people set ablaze houses of sitting MLA Rajkumari Jatav and former MLA Bharosilal Jatav in the Hindaun City, District Collector, Karauli, Abhimanyu Kumar said. While Rajkumari Jatav is from the ruling BJP, Bharosilal Jatav is a former Congress legislator who also served as a minister in the state. The incident occurred a day after Rajasthan and several other states saw large scale protests and violence during a ‘bandh’ called by Dalit organisations. 6) Cases of atrocities on Dalits continue to rise amid falling convictions: A Business Standard analysis shows there could be an objective basis to the growing perception that atrocities on Dalits are increasing while the conviction rate in these cases is falling. Numerically, there were more than 33,000 cases of atrocities on SCs in 2008, which peaked at 45,000 cases in 2014 while 40,800 cases were recorded in 2016, according to the National Crime Records Bureau data. Similarly, cases of atrocities on STs rose from 5,582 in 2008 to 11,451 in 2015 while 6,568 cases were recorded in the year 2016, according to the NCRB. 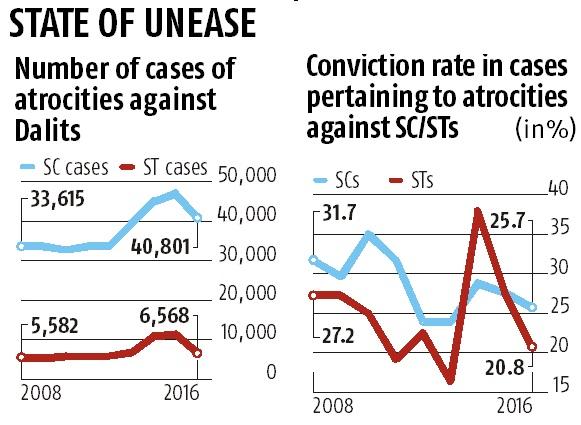 7) Rahul Gandhi targets Modi: Congress president Rahul Gandhi on Tuesday hit out at Prime Minister Narendra Modi for “not uttering a word” on the alleged atrocities on Dalits and tribals and “dilution” of the SC/ST (Prevention of Atrocities) Act. His remarks at a public meeting here on the fifth leg of his tour of the poll-bound Karnataka came against the backdrop of violence in northern parts of the country during yesterday’s protests against the alleged dilution of the SC/ST (Prevention of Atrocities) Act. The protests during ‘Bharat bandh’ against the Supreme Court verdict on the issue claimed at least nine lives and left hundreds of persons injured. 8) Rajasthan violence: Fresh violence broke out in Rajasthan on Tuesday as a 5,000-strong mob set ablaze the houses of a sitting and a former MLA, both Dalits, even as the death toll from yesterday’s nationwide stir by Dalit groups rose to 11 with two more persons succumbing to their injuries in Madhya Pradesh.

9) Eye on polls, Congress fuelling tension in the country over Dalit issue, says BJP: The BJP accused the Congress of “fuelling tensions” in the society with an eye on elections and urged the opposition party to tell people what it had done for the Dalits during its long rule at the Centre. With the opposition accusing the ruling party of being “anti-Dalit”, several BJP leaders, including many of its Dalit faces, compared the Modi government’s works for the development of the community with the alleged neglect of their interests by the Congress.

Law Minister Ravi Shankar Prasad also rejected as “unfounded” the opposition’s charge that the government delayed the filing of a review plea in the Supreme Court against its order on a law on atrocities against Dalits. 10) Kejriwal extends support to Dalits, says SC/ST (PoA) Act should be preserved: Delhi Chief Minister Arvind Kejriwal tweeted, “Under the situation resulting due to Supreme Court’s decision on SC/ST Prevention of Atrocities Act, AAP is with the movement of SC/ST community. Central government should deploy top lawyers for the petition in the Supreme Court and the need and fundamental intent of the Act should be preserved.” Purpose of the Scheduled Castes and the Scheduled Tribes (Prevention of Atrocities) Act: The main purpose of the act is:

* to prevent crimes against members of scheduled castes and scheduled tribes; and

* to provide for relief and rehabilitation of victims of such offences. Who is a victim and what are the offences under the Act? The victim is a member of a scheduled caste or a scheduled tribe against whom any of the following:

* Forces to eat or drink an offensive or uneatable substance

* Causes annoyance, injury or insult by any excreta or waste matter being dumped in his/her premises or neighbourhood * Parades naked or with painted face or body * Wrongfully deprives of cultivation of his land * Wrongfully deprives of his rights over any land, premises or water * Forces to beg or work as a bonded labourer * Prevents from exercising his right to vote or according to his wishes * Subjects to false legal proceedings * Causes injury or annoyance by a public servant on the basis of false information given to him/her * Deliberately insults and humiliates in public view * Forces to exercise his/her right to vote in a particular fashion * Assaults or threatens to impose social or economic boycott for voting differently * Prevents from availing benefits of any public service which is due to him after the election * Deprives of his/her right to clean drinking water * Deprives of his/her right to passage to a public place * Forces to leave his/her house or village * Falsely implicates in a criminal case which might result in his/her imprisonment or execution * Intends to harm or cause injury by burning a place of his/her dwelling or worship * Wrongfully causes injury or subjects to any other offence * Removing garments of an SC/ST woman * Gives or fabricates false evidence against an SC/ST member with the intent to get him/her wrongly convicted * The protection of an SC/ST is also available against a public servant. In the present case before the Supreme Court the complaint was against a public servant. The punishment provided under the SC/ST Act ranges from a jail term of six months to death.