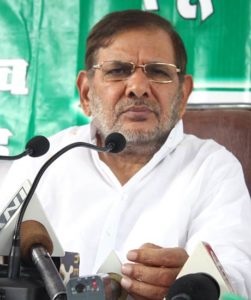 New Delhi: The Supreme Court said on Wednesday that it will hear on Thursday a plea by the JDU challenging the Delhi High Court order by which it had allowed the party’s former president and rebel MP Sharad Yadav to retain his official residence in New Delhi.

On May 18, the top court had agreed to hear the appeal by JDU’s Rajya Sabha MP Ramchandra Prasad Singh and issued a notice to Sharad.

On Wednesday, a vacation bench of Justice Adarsh Kumar Goel and Justice Ashok Bhushan said it will the hear the plea on Thursday.

Singh, the party’s leader in the Upper House had challenged an order of the high court passed on December 15 by which it had refused to grant interim stay on Sharad’s disqualification as a Rajya Sabha MP and allowed him to draw his salary, allowances, perks and retain the bungalow till the pendency of his plea.

The interim order of the high court had come on Sharad’s plea challenging his disqualification on several grounds, including that he was not given any chance to present his case by the Rajya Sabha chairman before passing an order against him and his colleague and then MP Ali Anwar on December 4.

Singh had sought their disqualification before the high court on the grounds that they had attended a rally of Opposition parties in Patna in violation of the party’s directives.

Sharad had joined hands with the opposition after JDU president and Bihar chief minister Nitish Kumar dumped the Grand Alliance with the RJD and the Congress in Bihar and tied up with the BJP in July last year.

Sharad was elected to the Rajya Sabha in 2016 and his term was scheduled to end in July 2022.

Anwar’s term as a Rajya Sabha MP expired in April. Both were disqualified under the anti-defection law.

Rajya Sabha Chairman M Venkaiah Naidu had disqualified Sharad from the JDU on a plea by Bihar chief minister Nitish Kumar-led JDU, which had cited Sharad’s association with its rivals like the RJD and the Congress to revoke his membership.

Sharad had gone to Delhi High Court against the decision. He had then claimed that the “real” JDU was with him and the one with Nitish was “sarkari” JDU.

Earlier, Sharad had announced the formation of a new political formation called Loktantrik Janata Dal but he was not a member of the party.