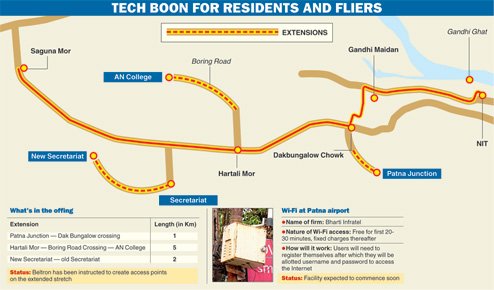 The free Wi-Fi facility in Patna is set for extensions.

At a time when the Narendra Modi government at the Centre is popularising its “Digital India” campaign, the Nitish Kumar government, too, is stepping ahead on the “cyber” front.

Patna is set to get a bonanza of public wireless Internet (Wi-Fi) facilities by the end of this month. The information and technology department has also instructed the agency looking after free Patna Wi-Fi project to extend the network to three more roads – Station Road, Boring Road and around the Secretariat building. Once extended, the total length of the network would increase from 18km to around 25km.

Authorities at Jaya Prakash Narayan International (JPNI) Airport have selected Bharti Infratel for commencing the free Wi-Fi facility at the city airport by the end of this month.

“Bharti Infratel has been chosen to install the Wi-Fi facility at the airport under the bidding process for the same. Accordingly, we expect the facility to start by the end of this month. Users would be allowed to access the Wi-Fi for free for the first 20-30 minutes and nominal tariff would be charged for every 30-45 minutes thereafter,” said Rajendra Singh Lahauria, the director of JPNI airport.

Most major airports in the country, including IGI Airport (Delhi), Rajiv Gandhi International Airport (Hyderabad) and Netaji Subhas Chandra Bose International Airport (Calcutta), among others provide access to free Wi-Fi for 30-45 minutes and charge mostly Rs 99 for the following hours. Tata Docomo, Bharti Infratel and BSNL are among the prominent Wi-Fi service providers at the Indian airports.

A recent study by Skyscanner, a leading travel search engine, has stated that Indian airports are ahead of European airports with regard to availability of free Wi-Fi.

The report published in September last year stated that while less than half of Europe’s biggest airports offer free Wi-Fi on an unlimited basis, most major airports of India provide free Wi-Fi to fliers.

With regard to working of the upcoming Wi-Fi facility at the Patna airport, a senior official with Airports Authority of India (AAI) said: “Routers would be installed inside the terminal building at several places, which would transmit Wi-Fi signals. Any flier with Internet-enabled devices like a laptop or mobile phones would be able to use it.”

Frequent fliers from the city are keen about commencement of the Wi-Fi facility.

“Wi-Fi is an important passenger facility at airports because people are at times required to sit for hours waiting for their flights. Professionals like me, who travel by air frequently, do a lot of work, including sending mails and browsing the net for official purposes, while sitting at the airport. Thus, I believe the Patna airport, too, should get the facility as early as possible,” said Kulbir Sohil, a native of Patna, who works with a private firm in Bangalore.

Patna, at present, boasts of arguably the largest stretch of free public Wi-Fi network in the country with the “Free Wi-Fi zone of Patna” extending from National Institute of Technology, Patna, on Ashok Rajpath and Saguna Mor on the western end of Bailey Road.

S. Siddhartha, the principal secretary at the science and technology department, said instructions have been given to Beltron, the agency looking after the Wi-Fi project, to extend the network on three more routes.

“Bihar State Electronic Development Corporation Limited (Beltron) has been asked to create access points, including installation of necessary equipment (routers) on three more routes in the city to extend the city Wi-Fi facility. We intend to commence the operation of the facility on the extended routes by the end of this month,” said Siddhartha.

Beltron had awarded the contract for installation of the corresponding equipment to Calcutta-based Benchmark Infotech Pvt. Ltd at an estimated cost of Rs 2.66 crore.