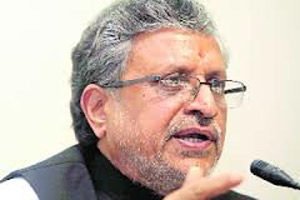 NEW DELHI: Amidst reports of a cash crunch and empty ATMs from several states, Bihar Deputy Chief Minister Sushil Modi on Tuesday said currency notes of Rs 2,000 denomination should not exist in the first place.

His statement came a day after Madhya Pradesh chief minister Shivraj Singh Chouhan claimed that Rs 2,000 notes were vanishing from the market, and alleged that there was a “conspiracy” behind it.

Modi said there is a crunch of coins in Bihar and added that the banks in the state are not accepting coins.

“Banks have issues with the counting of coins. We have asked the RBI to take steps in this regard,” he said.

Commenting on reports of ATMs running out of cash at some places in the state, Modi said the situation will improve within two-three days.

Several parts of Andhra Pradesh, Telangana, Madhya Pradesh, Bihar and poll-bound Karnataka have reported shortage of currency and ATMs running down, which the government today attributed to unusual spurt in demand in last three months.

Finance Minister Arun Jaitley said the “temporary shortage” in certain states is being “tackled quickly” and that there is “more than adequate” currency in circulation.