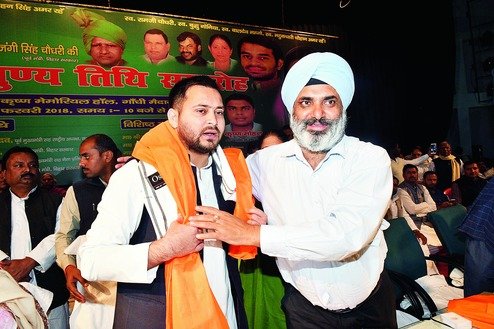 “Nitish ji will be around for another five years but I will be here for another 50 years. Why waste your energy on him? Strengthen my hands to fight for your cause,” he told a meeting of Nonia castes at SK Memorial Hall. He said the BJP has already finished Nitish Kumar politically.

After the bitter split between Lalu Prasad and Nitish, the RJD chief had said that Nitish had told him that both were playing their last innings and it would be leaders such as Tejashwi who would take over. Lalu had alleged that Nitish envied young Tejashwi’s popularity.

The EBCs – consisting of over 100 small castes – constitute 29 percent of the population and has largely sided with the JDU and the BJP and remained elusive to the RJD. The Nonia caste is an EBC caste found in large numbers in Rohtas and Kaimur. The RJD is trying to woo a section of the EBCs without which unseating the NDA in Bihar would be extremely difficult.

Lalu in the 2015 Assembly polls used RSS chief Mohan Bhagwat’s comment on reservation to turn the tide in favour of the Grand Alliance. Tejashwi on Wednesday picked up the strings to remind them of Mohan Bhagwat’s statement.

Bhagwat had pitched for a review of the reservation policy, contending it has been used for political ends and suggesting setting up of an apolitical committee to examine who needs the facility and for how long. He said though “interest groups” do get formed in democracy, aspirations of one section should not be met at the cost of others.

On Wednesday Tejashwi said: “The RSS and the BJP wants to do away with reservation. They do not want reservation to continue. That is why they have not released the caste census. They keep on holding meetings for the EBCs. Ask them how many Union ministers, chief ministers and officials in the PMO they have from the downtrodden castes? If they rule, the situation will go back to the older times when power was in the hands of a few castes,” he said.

He called upon backwards castes, EBCs, Dalits and Muslims to unite against the BJP. He continued his attack against Nitish stressing that the chief minister cannot be trusted. “Nitish can make a U-turn in four hours. He has made four governments in four years. What is the guarantee he will not make the fifth before the Lok Sabha polls?” Tejashwi asked, recalling how Nitish had pledged a Sangh Mukta India and was now working for a Sangh Yukt Bihar.

“Nitish is silent on Mohan Bhagwat’s 10-day stay in Bihar,” Tejashwi alleged. He said rampant corruption prevailed and most of the persons arrested in the anti-liquor drive belonged to the downtrodden castes.

“Had people surrounded the CM’s convoy when my father was the chief minister he would have got out of the car and met the people and asked officials to do their job. But Nitish lathicharges Dalits and the backward castes. Nitish is not the CM of the people but the CM of officers,” he said.