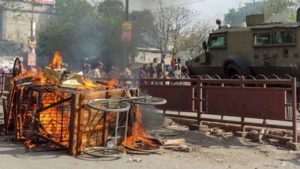 In the wake of recent communal clashes that erupted here during Ram Navami celebrations on Sunday, three additional companies of the Central Reserve Police Force (CRPF) will be deployed in Aurangabad to maintain law and order in the district.

The decision comes two days after a clash broke out between two communities during Ram Navami celebrations here.

The situation became tense on Sunday evening when rioters set ablaze more than 20 shops and pelted stones at those participating in a Ram Navami procession through Nawadih Colony.

As per reports, nearly 50 shops near Jama Masjid located on Old GT Road were torched by rioters, while nearly 60 persons, including 20 policemen were injured due to stone pelting by miscreants.

The situation further intensified on Monday, which thereby led to a curfew being imposed in the vicinity. Furthermore, internet services were reportedly suspended for a 24-hour time span.

Meanwhile, minor clashes were also reported from other parts of the state, including Gaya, Siwan and Kaimur.

The issue led to a heated exchange in the Bihar Assembly where the Leader of Opposition, Tejashwi Yadav, alleged that for the past several hours riots had been taking place at Aurangabad and shops belonging to a community were being set afire and curfew had to be imposed.

Yadav made the allegations while state minister Vijender Yadav was reading out the government’s reply to the debate on the budgetary allocation for the home department.

A visibly upset chief minister rose to intervene and said the floor of the House must not be used to give publicity to rumours which could aggravate communal tensions.Kumar said Ram Navami had passed off peacefully in Bihar “with a few exceptions” and asserted that there was no report of curfew or police firing in Aurangabad.

“If you (Tejashwi) try to give vent to rumours through the House, it vitiates the atmosphere…Please don’t do such things,” Kumar said.”If there is any local issue and you want to make it a state-level one through the House, then it will be construed that you are willing to whip up passions… We all should try to maintain peace and amity,” the chief minister said.Using the endearment “Babu” to address the young RJD leader more than once, Kumar told his former deputy that he has a long political career ahead of him and hence should be willing to learn.

He turned towards veteran RJD leader Abdul Bari Siddiqui, who was seated beside Yadav, and was heard asking “Why does anyone not teach him (Tejashwi) some basics?” “We all, including the DGP and the Home Secretary, are talking to the people concerned. Senior officials have been rushed to the spot to keep things under control”, he said, adding “No one will be spared”.