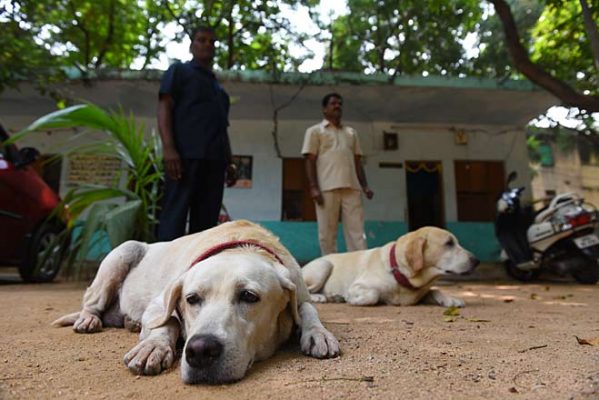 Hyderabad: The Integrated Intelligence Training Academy (IITA) in Moinabad is extending a much-needed helping hand to the Bihar Crime Investigation Department (CID) by training police dogs from Bihar to keep liquor and narcotics mafia there at bay.

The CID officials had approached various agencies, including the National Training Centre for Dogs of the Border Security Force (BSF) Academy, for getting necessary assistance in training their dogs in smelling alcohol. The Bihar government has enforced prohibition since April 2016.

However, after enquiring about the training methodology of the IITA, they sought its help. The IITA officials responded positively and the Bihar CID officials sent 20 dogs along with their handlers. These dogs have started undergoing training since June 17. The services of these canines will be utilised after completing their training in sniffing liquor and narcotics by the end of the year, an official said.

The Bihar police mooted the idea of introducing sniffer dogs as they were finding it difficult to keep a tab on inter-State check-posts to manually check vehicles for liquor and narcotic substances. Initially, they had come up with a proposal to install scanners at the check-posts, but it did not materialise.

They then approached the IITA, which has been imparting special training to dogs before sending them to various States. Police forces from the North East, Andhra Pradesh and Rajasthan among other States have inducted dogs into their forces after completing training at IITA.

Additional Director General of Police (CID), Bihar Vinay Kumar said they contacted canine training centres of Army and paramilitary forces. However, these centre could not meet their requirement of sniffing alcohol and narcotics. “After approaching the IITA, we sent our canines for a six-month training session,” he added.