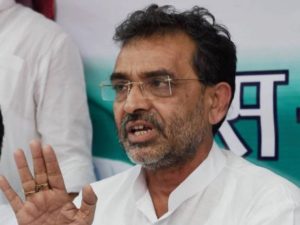 Union minister Upendra Kushwaha today sought to downplay his absence at a get-together of senior NDA leaders here last night which he said was due to “personal reasons” and asserted that the coalition was “intact.” Kuswaha excusing himself, citing his preoccupation in Delhi, from the gathering of the NDA leaders, first since Chief Minister Nitish Kumar returned to the coalition last year, had indicated discontent within the BJP-led grouping over the prickly issue of seat-sharing.

“I could not attend the function because of personal reasons. But, other leaders of my party did. Please do not try to read anything between the lines. The NDA in Bihar is intact,” Kushwaha, who heads the Rashtriya Lok Samata Party (RLP), told reporters at the airport here on his arrival from New Delhi. Asked whether his unexpected absence at the feast did not indicate that he had some differences with his colleagues in the NDA, Kushwaha shot back “Amit Shah too did not attend the dinner. Would you pose such a question to him?” He also evaded queries about a statement issued by his party’s working president Nagamani yesterday that the NDA would immensely benefit if the coalition declared Kushwaha as its leader in Bihar and then fought the Lok Sabha polls next year and the state assembly elections a year later.

“This is a question you should ask Nagmani,” Kushwaha, who is on a three-day tour of Bihar, said before leaving for his Lok Sabha constituency of Karakat in Rohtas district. Nagmani, who was among the leaders of the RLSP who attended the feast, had claimed that Kushwaha represented a caste group which comprised 10 per cent of Bihar’s total population and hence his projection as the NDA’s leader would benefit the coalition in elections.

He had also claimed that Chief Minister Nitish Kumar had a “disadvantage” since he belonged to the Kurmi caste, which is numerically small. Though the RLSP chief tried to show that everything was fine in the coalition, sources close to him pleading anonymity, however, said that the Minister of State for HRD has been miffed over “shabby treatment” meted out to him by NDA leaders in Bihar. They alleged that Chief Minister Nitish Kumar did not invite Kushwaha at an Iftaar party he had hosted at his official residence earlier this week nor has he been invited to a similar function organized by Deputy CM Sushil Kumar Modi today.

They also claimed that state BJP president Nityanand Rai invited Nitish Kumar and Ram Vilas Paswan, who respectively head the JD(U) and the LJP, by meeting them in person, however, Kushwaha was requested to come to Iftaar by a telephone call.

Recent statements by the JD(U) that it was the elder brother in the NDA in Bihar, implying that it deserved a lion share of the 40 Lok Sabha seats may also have added to the anxieties of the RLSP which was formed in 2013 by Kushwaha after he resigned from the Janata Dal (United) and gave up his Rajya Sabha seat.

While the RLSP has three Lok Sabha members, the JD(U) has only two. However, in the assembly, the JD(U) has about 70 MLAs as against only two of the RLSP. Similarly, the BJP and the LJP have more number of MPs than the JD(U) though their tallies in the state assembly is much smaller than that of the Chief Minister’s party.

LJP and RLSP as coalition partners of BJP had cornered 31 out of a total of 40 Lok Sabha seats in Bihar in the last general election. Nitish Kumar’s JD(U) which had fought 2014 Parliamentary alone had received severe drubbing and won only two seats. But, Kumar walked out of Grand Alliance which had RJD and Congress along with JD(U) over graft charge on then Deputy Chief Minister Tejashwi Yadav, and joined hands with BJP in July last year to form a NDA ministry in Bihar.

Meanwhile, the going on in the NDA provided an opportunity to opposition RJD to take a potshots at it. RJD national spokesman and Rajya Sabha member Manoj Jha claimed “what is happening in the NDA is reflective of the tectonic shift in Indian politics as the common man sees himself pitted against the arrogant BJP.

Leaders like Kushwaha have begun to do a rethink over their alliance with the BJP and many more would follow the suit in the near future.” Notably, a few months ago the RJD had supported a series of small human chains organized by the RLSP at all district headquarters to press for educational reforms, even as parties like the JD(U) and the BJP had questioned his move.

Kushwaha also had met RJD president Lalu Prasad when he was in Delhi AIIMS which had further triggered speculation he might also follow former Chief Minister and Hindustani Awam Morcha (HAM) chief Jitan Ram Manjhi who left NDA to join hands with RJD. Meanwhile, BJP leaders here today held a meeting to take stock of the political situation in Bihar.