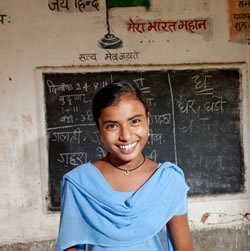 Over 17 million children in Bihar were targeted for deworming treatment using Albendazole, on 23rd January 2014. Albendazole is drug recommended by the World Health Organization to combat parasitic worms, and has been safely used to treat hundreds of millions of children worldwide.

This was the third round of deworming using Albendazole in Bihar state, and the number of children targeted makes it the world’s largest school-based deworming initiative. These 17 million school-age children, both enrolled and non-enrolled, were targeted for deworming treatment in all government schools in Bihar, as part of the Bihar School-Based Mass Deworming Programme. Over 70,000 schools took part in the programme being carried out jointly by the State Health Society of Bihar (SHSB) and the Bihar Education Project Council (BEPC), with support from ‘Deworm the World Initiative’, part of the global non-profit organization Evidence Action.

Priya Jha, Country Director, Evidence Action’s Deworm the World Initiative, said that interdepartmental linkages, and sustained commitment and coordination between the three government departments of Health, Education and Women and Child Development, has been the real backbone in making this world’s largest school-based deworming programme in Bihar a success. Ms. Jha stressed that there is a need to expand access to deworming initiative to include preschool children in Bihar, which will enhance to public health impact of this intervention. Over 50 per cent of children in Bihar are infected with parasitic worms and all school-age children in the state are at risk of being infected at any time. One tablet of albendazole rids the child of parasitic worms which live in the child’s intestines and eat the nutrients the child needs for healthy mental and physical development. This tablet is safe for both infected and non-infected children and has a pleasant flavour.

The first round of school-based deworming in Bihar, carried out in 2011, treated 17 million children, followed by 16.3 million children in 2012. Children who are left out on deworming day (23rd January) will be provided the tablet on the mop up date of January 28. Non-enrolled children are advised to have their meals at home and take the drug at the nearest school.

The SHSB has issued an adverse event protocol to all health facilities and providers across the state to advice on management of any adverse events if reported. All headmasters and schoolteachers who have been oriented on deworming had already received a briefing on adverse event management at the school level.

Priya Jha said to Citizen News Service (CNS) that side-effects are rare, minor and transitory, for example, feeling nauseated. However, if children have extremely high worm loads, the first round of treatment can cause abdominal pain and gastrointestinal distress. If an area is known to be severely affected, the potential for side-effects should be explained to teachers and families so that they clearly understand that the pain is not the result of the drugs, but due to the dying worms being expelled. The teacher should ask the child to lie down in the shade until they feel better, and if possible, to give clean water to the child to drink. The recommended doses of albendazole have been given to hundreds of millions of children in different countries worldwide with very few adverse reactions reported.