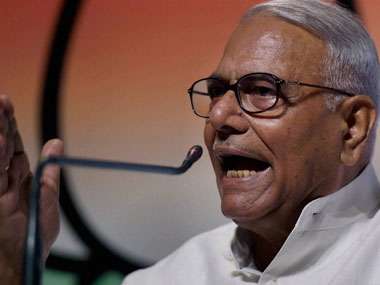 “I am ending today all the relations I had with BJP for so many years,” said Sinha at the first event of his newly launched ‘Rashtra Manch’ forum in Patna. Fellow dissident BJP leader and MP Shatrughan Sinha and several Opposition leaders including Renuka Chaudhary of Congress and RJD’s Tejashwi Yadav participated in the event.

Sinha, who had earlier embarrassed the BJP leadership by his caustic assessments of the country’s economic condition under the NDA government, said he would not join any other party. He also said democracy is under threat in the country and blamed the government for Parliament not functioning for a long time.

“I had distanced myself from electoral politics five years ago. Now, I am announcing here my renouncement of party politics. I will not have any relations with party politics. I am not going to be a member of any other party. I will run a robust campaign with these friends here to save democracy in the country,” said Sinha, 80, who served as Union finance minister in the cabinets of Prime Ministers Chandra Shekhar and Atal Bihari Vajpayee.

“We need to ponder over the country’s situation or else the nation will not forgive us for keeping silent on all-round deterioration,”said Yashwant Sinha, who had formed the ‘Rashtra Manch’ forum on January 30 as an apolitical forum to highlight the Centre’s “anti-people policies”.

Renuka Chaudhary attacked PM Narendra Modi, saying he enjoys foreign trips when protests are being held across the country over ghastly incidents of rape. “The PM cannot think anything else other than selling tea, so he advised people to sell pakoras,” she said, adding that Congress supports Yashwant Sinha’s latest initiative.

Shatrughan Sinha lauded Yashwant’s initiative as a “worthy, timely step” to save democracy in the country. He attacked the BJP central leadership and described RJD leader Tejashwi Yadav as a “very mature leader, the only rising face in Bihar politics”.

Tejashwi, who is jailed RJD chief Lalu Prasad Yadav’s younger son and a former Bihar deputy chief minister, tore into BJP and JD(U) for “grabbing power through the back door” in the state. He asked Bihar CM Nitish Kumar to learn from Yashwant Sinha how to give up the “hunger for power” in the interests of the state and the nation.

BJP leaders in both Bihar and Jharkhand were surprised by Yashwant Sinha’s decision to quit the party, but said it will not make any difference to the party. “He has been speaking against the party for quite some time. He is among people who cannot see the success and rise of Narendra Modi. His departure will make no difference to the party,” said senior BJP leader and Bihar’s road construction minister Nand Kishore Yadav.