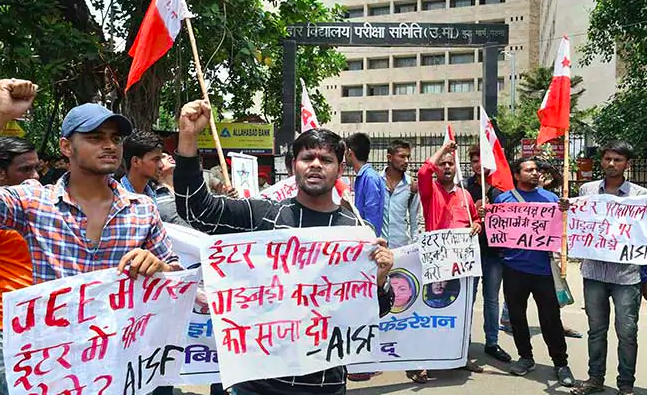 The pass percentage in the class XII examinations of the Bihar Board may have risen by a sharp 15 points to nearly 53%, but the result has revealed flaws in the education system which do not allow meritorious students to excel in the absence of proper coaching facilities.

According to local media reports, the results announced on June 6 have brought along a host of controversies as there have been instances of students getting more than 100% marks while others are getting blank marksheets.

This led to spontaneous protests by the students and their relatives and friends outside the Bihar School Education Board (BSEB) office in Patna. Their grievance against grave discrepancies in the marking appeared justified for the reasons that the results had thrown up surprising individual scores. So while a student of Arwal district reportedly got 38 out of 35 marks in the mathematics theory paper and another from East Champaran got 38 out of 35 in physics theory, there were also those who scored despite not even appearing for an examination – like a student from Vaishali, who got 18 marks in biology without having appeared for that exam.

In the past couple of years, the BSEB results have often evoked ridicule since it was revealed following one of the exams that the ‘topper’ could not even pronounce the name of the subjects while another who excelled in music could not sing properly.

Ultimately, Bihar education minister, Krishna Nandan Verma, came out in her defence and stated that she has “merit and proved it by being a NEET topper. She must be appreciated and there shouldn’t be unnecessary controversy. All procedures were followed for her to take the exam.”

However, many have questioned how she could have met the 75% attendance criteria as a student of a school in Sheohar district of the state while taking regular coaching from a private institute in Delhi for the past two years.

The controversy has not ended with the minister’s statement. Rather, it has brought into the spotlight the inadequacy of the schools in most states when it comes to providing high standards of education because of which many of the children are forced to take private coaching at far-off places.

The father of a student, who had taken coaching for the pre-medical test in Kota (Rajasthan), said there are two ways to enrol in schools while studying full-time in places like Delhi or Kota for competitive exams. “Either the institute helps you get enrolled in a private school in a suburb or you yourself find such a school which is willing to mark the attendance of the child even though he or she may not be attending the classes.”

The school gets to pocket the fees without providing any education or facilities and usually such students are better performers and improve the school’s overall performance and rating. The child on the other hand gets to appear as its student in the board examinations. “The only catch here is that the student has to identify the school bearing in mind that during the board examinations he or she would have to visit it for the practical examinations.”

Another parent said that for availing such an arrangement, the unfortunate part is that some of the students usually withdraw from premium schools in class XI and XII. “The premium private schools and convent schools make no such relaxation of attendance and you have to attend classes. The only option left then is either to complete the schooling from there without any additional full-time coaching and hope to get through the entrance exams or in the event of not getting through, attend full-time coaching classes only after passing class XII.”

But many of the students are now taking the difficult route of leaving good quality schools and joining more flexible smaller ones in order to pursue their private coaching classes.