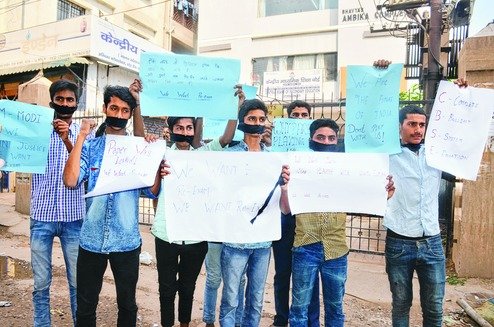 Patna: A handful of Class X CBSE students protested in front of the CBSE regional office on Saturday demanding re-exam of the class X mathematics paper.

Secretary of school education and literacy, Anil Swarup, on Friday had ruled out the pan-India mathematics re-test for class X CBSE exam claiming that the leak was limited to Delhi and Haryana and if the examination was to be held again, it would be confined to Delhi and Haryana. Swarup said the fresh class XII economics exam would be held on April 25.

The class X students, who took part in the protest in Patna, had covered half their faces with black cloths. They claimed that the mathematics question paper was circulated to them a day before the exam. “Why only the exam would be held in Delhi and Haryana? The paper was leaked here in Patna also. So why the CBSE is not conducting a re-test of the paper here,” said a student.

The students held placards with messages like “CBSE stands for complete bullshit system education”, “We are the future of India, don’t play with us” and others.

The students said they would again assemble in front of the CBSE office on Monday and would conduct a similar protest on that day also.

Sources said the CBSE had earlier asked centre superintendents of examination centres to arrange for six high-density printers but many of them have communicated to the CBSE that they don’t have high density printers.