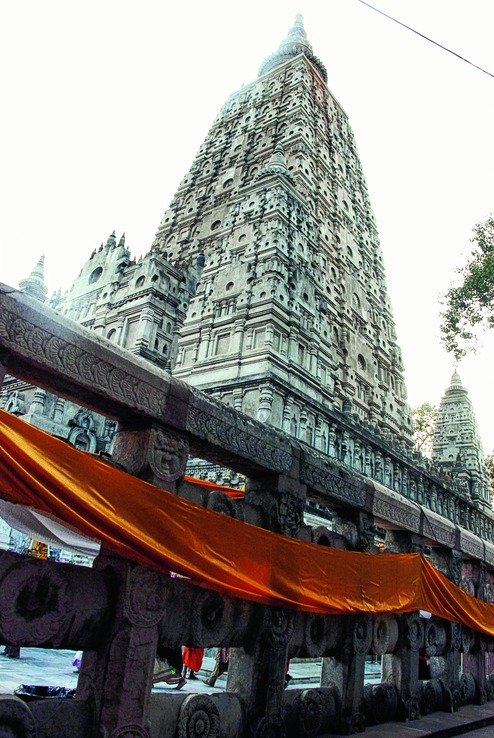 Bodhgaya: The Archaeological Survey of India (ASI), Patna circle, has written to its Delhi headquarters to seek permission to stop work pertaining to restoration and renovation of the inner railing at the Unesco World Heritage Mahabodhi Temple in Bodhgaya.

It has held the Bodhgaya Temple Management Committee (BTMC) responsible for creating hurdles in the restoration work and has also cited the way BTMC had been trying to interfere in the hiring of artistes engaged for carving stone pillars and planks for renovation of the inner railing.

Presently, as The Telegraph has reported, the work is at a standstill for around three months, after BTMC removed the heavy stone pillars and carved planks from the temple campus to another location outside it. The shifting, which was done without permission or communication to ASI, led to damage to several carved stone planks, causing a setback in the renovation work.

The unauthorised shifting happened around mid-January when the Dalai Lama was in Bodhgaya to attend religious ceremonies and give sermons.

The letter to ASI director-general (DG) Usha Sharma by Patna circle superintending archaeologist D.N. Sinha, a copy of which is with The Telegraph, cites a similar incident in 2002 when the obstructions caused by BTMC had led to the central agency quitting the work midway.

“Since the conduct of BTMC in the present case is again un-tuned to mutualism and not at all conducive to further continuation of work, appropriate decision on similar lines is desirable in the dignified interest of our department,” the letter says.

It has also requested the DG to “issue necessary guidelines regarding further course of action”.

Focusing on the unauthorised shifting of stone pillars and finished planks, the letter says that the action without prior information to ASI or even after it was done, is “in absolute violation of the spirit of mutual trust and understanding”.

Sinha’s letter also raises the point that the stone pillars and objects have been shifted to Taradih, which is a state protected archaeological site, which had a Buddhist monastery in ancient times. Stacking such heavy objects could damage the archaeological remains.

The Mahabodhi temple marks the place where Lord Buddha is said to have attained enlightenment, and is currently a high security zone after the 2013 serial bomb blasts and for being on the target of terrorists. Every Buddhist across the globe aspires to visit it at least once in his lifetime.

The ASI began phase-II of the work in May 2017 to restore inner railings on the request of BTMC. The inner railings have 150 panels. Each panel includes three horizontal bars fixed between two pillars that are topped with a “cap stone”.

These have intricate carvings that tell the story of the life of the Buddha. Some of them bear various symbols connected to Buddhism.

Their stone replicas need to be made on site as artistes have to refer to the existing railings to create identical match.

“Even before commencement of work in May 2017, BTMC members started complaining about the quality of work. They raised doubts about the skill of artists hired by us. Surprisingly, these were the same artistes whom BTMC had employed for restoration of the temple’s outer railing,” an ASI official said on the condition of anonymity.

“Some artists, giving reference of BTMC members, wanted us to give them the tender of the entire work that we had to do. When we explained that it was not possible, they asked us to engage them at Rs 1,500 per day, which was more than double that we pay to the artists. We wonder whether the entire imbroglio is fallout of this,” the ASI official said.

Contacted by The Telegraph on the issue, BTMC member-secretary Nangzey Dorjee denied any damage to stone pillars or carved planks and said the committee just wanted “quality work without any delay”.

“We are hopeful that the ASI will resume work soon and complete it without any delay. It is an important work for us. They (ASI people) can work at the site where we have shifted the stone pillars. I don’t think there is any issue,” Dorjee said.

He also denied that any committee member tried to interfere in the work of ASI or to push other artisans to work. He added that ASI Patna circle officials have not met him so far and he is yet to hear anything from the ASI DG.