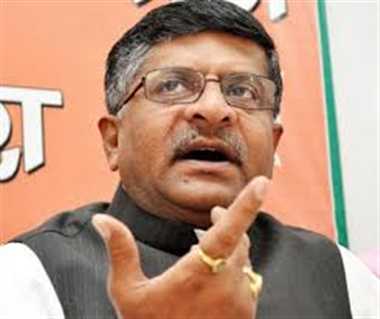 PATNA: Union law and information technology (IT) minister Ravi Shankar Prasad said on Friday the Constitution has provided for reservation under the scheduled caste (SC) category only for dalit groups among the Hindus, Sikhs and Buddhists, and no social entity of other religions, including Muslims, could claim for reservation benefits as prescribed for the SC groups.

“If any social group from any other religion — including Muslims — makes claim for the quota benefit as dalit category, it has to explain that the social discrimination has existed in its religion as the Constitution is clear that in the SC category, the reservation is only for Hindu, Sikh and Buddhist dalits. This cannot apply to any social group from any other religion claiming to be dalits,” Prasad said at the state BJP headquarters. Prasad said demands have been recently raised in Bihar on behalf of some Muslim groups for their inclusion in the SC category for the quota benefit. State BJP president Nityanand Rai accompanied Prasad.

Prasad said Hindu religion has been marked by “discrimination” against SCs or dalits, “which is why the framers of the Constitution had made provisions for what is called the dalit groups”.

The minister, describing himself as a “private individual,” said “if some social groups among Muslims are recognized as dalit Muslims and included in the SC category, then they would only eat into the existing quota prescribed for the Hindu, Sikh and Buddhist dalits.”

Prasad seemingly made the observations in the backdrop of the recent alleged “dilution” of the SC/ST (Prevention of Atrocities) Act, 1989, made by the Supreme Court order, and the controversy arising thereof. Dalit groups held pro-reservation Bharat Bandh on April 2, countered by the anti-reservationists on April 10.

The organizations of dalit groups and political parties supporting the April 2 bandh maintained that the apex court had given the order because the BJP-led PM Narendra Modi’s government did not argue its point of view in the court.

Prasad said the Centre had not been made a party in the case that the Supreme Court heard after the Bombay high court’s ruling. He insisted that the SC/ST Act was first framed in 1989 when the BJP was partner in the V P Singh government and the Narendra Modi government strengthened its provisions by expanding the incidents that could invite application of the Act. Prasad also cited a slew of economic and other measures that had been taken for the uplift of the SCs and STs.

“The government of PM Modi has worked for the change in their life and also for their empowerment,” Prasad said. Citing two circulars issued by the government of dalit leader Mayawati in Uttar Pradesh, he said they amounted to “serious dilution” of the SC/ST Act in its implementation.