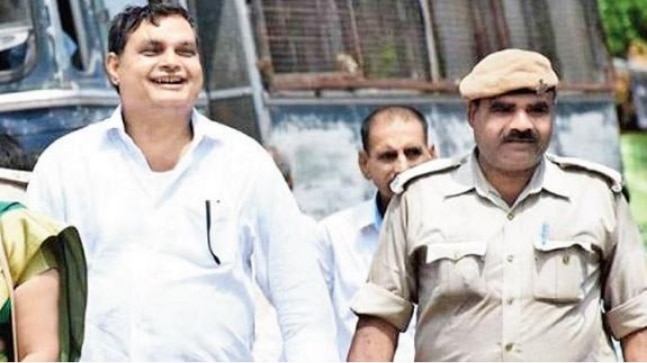 Patna: The life of Brajesh Thakur, the alleged mastermind behind the horrific sexual exploitation scandal of minor girls at the Muzaffarpur shelter home, has been revolving around NGOs and politics for several years now.

A native of Pachdahi village under Sakra Police station of Muzaffarpur, Brajesh has worked persistently to build his empire that comprises three newspapers that are run by his son and daughter and a network of shelter homes. He had also tried his hand at politics, twice, but decided it was not his cup of tea.

He still enjoyed clout in political circles, as can be seen by the government contracts he bagged, both for his NGOs and the newspapers.

A muscleman by nature, he escaped a bid on his life in 2001 when one of his political rivals sprayed bullets at his house in his ancestral village.

The district headquarters is just 18 kilometres away from his village where he has established base for running Hindi daily Pratah Kamal. The printing press, his residence and the Balika Grih shelter home turned horror house are located in the same campus in Sahu road area of Muzaffarpur.

His father, from whom he inherited the Hindi daily, was once arrested by CBI for black marketing of newspaper prints in mid-eighties. Thakur carried his legacy and even expanded it.

At present, he runs three newspapers – Pratah Kamal (Hindi), Halaat-e-Bihar (Urdu) and News Next (English). He made his daughter Nikita Anand the managing editor of the English newspaper based in Patna but nobody has ever seen it on stands like the other two.

His Urdu daily is run by Madhu, a mystery woman considered to be his front woman. She was also responsible for managing things at the Balika Grih, where 34 minor girls were raped and tortured. She went underground after the shelter home scandal was busted and Thakur, along with nine other functionaries of his NGO Seva Sankalp Evam Vikas Samitit, were arrested on July 3.

Thakur has always ensured that a copy of his newspaper reaches the table of every bureaucrat and mid-level officer in the district. He has also been accused of faking circulation figures to get advertisement worth Rs 30 lakh per year from the state government.

Being the member of press advisory committee of Vidhan Sabha and state-level accreditation committee, he was no stranger in the corridors of power and a regular in chambers of ministers and legislatures, including deputy CM Sushil Kumar Modi, rural development minister Shravan Kumar and others.

Brajesh had registered a number of NGOs in the name of his family members and acquaintances. Officials say till now his involvement in 11 NGOs has been established. Now, all have been blacklisted.

Seva Evam Sankalp Samiti was responsible for running not only Balika Grih but another shelter home for adult women in the same city.

It was named Swadhan and is under the scanner as eleven of the adult inmates along with their four children were found missing when the police raided its premises.

Thakur was also running an old age home in Samastipur in the name of his mother and a children’s home in Moithari. He also secured many projects funded by National Aids Control Organisation.

Unlike his father, Brajesh dreamt big on the basis of the contacts he had established through liaisoning and money management. He decided to plunge himself in politics and his first target was to reach to assembly.

At the age of 27, he fought as an independent candidate in 1995 assembly election from Kurhani assembly seat and lost by a big margin. Then he joined hands with Rajput muscleman-turned-politician Anand Mohan whose wife Lovely Anand had created flutter by defeating Kishori Sinha in the by-election for Vaishali Lok Sabha seat in 1994.

Her win was the first setback for then Chief Minister Lalu Yadav’s RJD who was considered anti-upper caste. Anand Mohan and his party Bihar Peoples Party (BPP) emerged as a hope for the upper caste. Thakur and other prominent Bhumihar leaders found refuge in BPP.

Mohan rewarded Brajesh by giving him the ticket in the next assembly elections held in 2000 from the same Kurhani seat. Thakur again lost but ended as runner up to RJD candidate Basawan Bhagat. But he remained hopeful.

BID ON HIS LIFE

Brajesh lowered his ambitions and filed his nomination for Zila Parishad elections next. He was in a direct fight with another muscleman Shah Alam Shabboo.

It was the month of May and the voting was underway in the scorching heat. In those days of booth capturing, temper was running high in both the camps when someone told Shabboo that Thakur was trying to influence voting at some booths.

Lakhinder Thakur, also a contestant, remembers what happened next. “Infuriated, Shabboo and his goons headed for Thakur’s home in two Ambassador cars. Soon after reaching there, they fired indiscriminately at the Brajesh’s house. But fate was on his side and he was unhurt.”

Brajesh lost this election too and then put breaks on his ambitions but remained politically active. His rival Shabboo fought the 2005 election from Kurhani and lost it. He is right now out on bail in another murder case being investigated by the CBI.