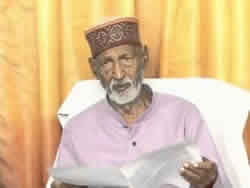 Accompanied by Buxar’s official BJP candidate Ashwani Kumar Chaube and others, Lal Muni Chaubey flew by a helicopter from Patna to Buxar and withdrew his candidature on the last date for withdrawal of nominations.

Later, talking to reporters, the 71-year-old four-term MP from Buxar said he decided to withdraw his candidature after being assured by Modi that senior leaders like him who failed to get tickets would be suitably accommodated.

Modi also promised to carry forward legacies of former Prime Minister Atal Bihari Vajpayee and senior BJP leader L K Advani, Chaubey said, adding that he decided to withdraw his candidature as he was not aspiring for a position.

Chaubey yesterday said he could not ignore Modi calling him twice in the past couple of days and expressing respect.

He said he would campaign for Ashwani Kumar Chaube, the BJP’s official candidate, and ensure his victory.

If the party required his services, he would campaign for Modi in Varanasi too, the veteran leader said.

Chaubey had raised a banner of revolt against the BJP after being denied a ticket from Buxar and filed nomination papers as an independent candidate.

He had also come down heavily on BJP president Rajnath Singh questioning the process of selection of candidates in which senior leaders like him and Jaswant Singh were denied tickets.