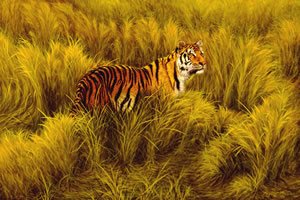 Patna: Bihar is developing India’s biggest grassland of over 800 acres in its only tiger reserve in the state’s northeast to provide a wildlife friendly environment for the big cats whose numbers have doubled in the last three years.

“We have decided to turn 800 hectares of forest in the tiger reserve into the biggest grassland in the country. The work has already begun to clean the bushes of unwanted species like mikenia, eupatorium and phoenix, which are the main cause of fires, to convert it into a grassland,” Santosh Tiwari, director-cum-conservator of the Valmiki Tiger Reserve in West Champaran district that borders Nepal, said, in an interview.

Tiwari said there is no place in the country with such a large grassland.

“We have estimated we will spend Rs. 20 million,” he said, adding that lack of funds had delayed the project. One other major problem is that residents of bordering villages of Uttar Pradesh used the core forest area of the reserve for grazing their cattle.

“We will have to fence and develop grassland to check the grazing of cattle,” Tiwari said.

He said that after the grassland was fully developed, it will become a safe zone for tigers as well as deer in the reserve. More grassland will support more prey animals, which will in turn support more tigers.

According to him, the Madanpur forest range in the tiger reserve is home to many herbivores because the rich alluvial soil enriched by the river Gandak has favoured the growth of grasses. The grasses in the reserve include imperata cylindrica, saccharum spontaneum and saccharum munja.

Samir Kumar Sinha of the Wildlife Trust of India, which is helping the forest department to develop the grassland, said the tiger reserve had more grassland in the past; this gradually turned into woodland due to lack of management. People also turned them into agricultural land.

Thanks to the improvement in the condition of the grassland, the number of tigers in the reserve has more than doubled in the last three years. Mixed forest vegetation is crucial for the herbivores as they are important sources of food. The availability of quality food boosts their chances of breeding.