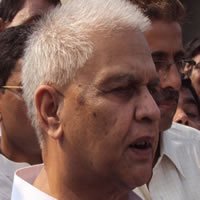 A new twist has suddenly popped up in the much media attended case of the abduction of the Bihar Finance Minister Bijendra Prasad Yadav’s 11-year-old grandson who had gone missing on July 1. According to the police on Thursday, Manish Kumar, the grandson, was not abducted, but ran away on his own to avoid going to school.

Supaul SP Sudhir Kumar Porika, who brought him back from Madhepura, said the boy was questioned and he spilled the beans after being assured that he would not be chided or punished if he told the truth.

“At first he was telling stories of six men coming in an SUV and abducting him, but he later revealed that he fled on his own as he did not want to attend school. The school principal was appeared to be tough on the boy as he was weak in studies,” Porika told PTI.

The SP added that Manish went to neighbouring Saharsa district with Rs 150 in his pocket and stayed with a friend. The money got over within two days and he and his friend worked odd jobs for a couple of days to get food. He then moved to Madhepura district and worked as a helper of a mason who provided him food in return.

Manish was found from Budhma railway station in Madhepura district on Wednesday night.

“We verified the boy’s story by sending teams to all the places he mentioned. The boy got a taste of hardship for eight days and seems to have been reformed,” added the SP.

Kumar was produced in the court of first class judicial magistrate Manish Kumar in Supaul, where his statement was recorded. The court ordered that the boy be handed over to his parents.

After the boy went missing, his family members lodged an FIR saying he had been kidnapped.

The case had rocked the state for the past one week. The opposition BJP criticised the state government on the deteriorating law and order situation in Bihar, saying that even relatives of ministers were not safe.