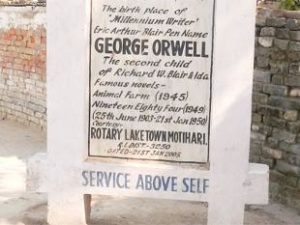 Patna: If there is hope, it lies in the proles, said George Orwell in his epochal 1984. Thirty turbulent years after the year his novel made famous, Orwell is getting a monument built to him in Motihari, where proles once lived and still do in circumstances that could have compelled the English novelist to embark on a similar study as The Road to Wigan Pier, his searing study of the abject and cruel living conditions of  English miners.

Motihari, a noisy and dusty town in the East Champaran district of Bihar, can lay solid claim to English literature. Because it was here that George Orwell was born as Eric Arthur Blair to Ida and Richard Blair in 1903 and lived for about a year before moving back to England with his mother. His father was an official in the opium trade and an efficient cog in the wheel that supplied the drug to China, making him an able bureaucrat of British imperialism.

Motihari, like most of Bihar, has remained largely untouched by the spit and polish of swift liberalisation that has swept through pockets of India after 1991, and an Orwell museum, for which the Bihar government has promised Rs 60 lakh, can be its most important marker. The UK’s Guardian has reported on the making of the memorial.

Orwell, who grew up detesting the ‘natives’ and later educated himself and wrote against such prejudice, would have found the frantic efforts by a local cash-strapped government to build a museum in his honour amusing if nothing else. A comrade of the working classes, he would have wanted the money used in bankrolling utilitarian projects.

But then Orwellian principles seemingly have little place in a world that considers competition and rapid growth as the only means to survival. Also, only a physical monument can draw any connection between the author of ‘Animal Farm’ and ‘1984’ and a town that has grown haphazardly, standing on encroached shacks and makeshift buildings.

The crumbling colonial structure where Orwell was born stands just 4 km from Chatauni Chowk, the entry to Motihari, separated by a main road and a narrow road, both full of shops blaring popular Bhojpuri film songs through big speakers, vehicles dashing off in all directions and strays roaming freely. Orwell and the house he was born in have no place in the lives and minds of this place, just like his books.

“Some people organise a function every year, but I don’t think people here give much thought to Orwell and his Motihari connect,” said Shashank Shekhar, a tax consultant in the town. There are just two libraries in the town – one with Urdu books and Navyuvak Pustakalaya – and neither keeps any of Orwell’s works. The odd book seller on the street or at the railway station might not even recognise his name.

“Yes, I have heard about George Orwell and the house, but I haven’t read any of his books,” said Ajay Kumar, a local trader who stays about 300 metres away from the old, dilapidated white cottage with a tiled roof that now looks set to become a landmark.

The building was left to moulder for several decades, damaged in an earthquake and providing occasional shelter to animals until it was handed over to an adjacent school to be used as a hostel for teachers.

And nobody in the vicinity knew it was Orwell?s birthplace until journalist Ian Jack came visiting in the early 1980s with some old photographs and documents.

Since then, there have been sporadic calls to restore and preserve the building as a monument, but nothing happened for two decades. Then some locals took up the campaign and formed a George Orwell Commemorative Committee. There have been many promises and false starts to restore and preserve the building since. In 2003, the writer’s 100th birthday was celebrated in Motihari and two years later, a plaque was installed in the campus housing the building. In 2010, the state government helped build a boundary wall for the 2.5-acre campus that housed a few cottages and a large warehouse that was used to store opium.

Chief minister Nitish Kumar visited the campus in 2012 and announced the restoration of the building along with a park and museum in Orwell’s memory. Work finally started on June 25, the writer’s 111th birthday.

Initially, the restoration work will be limited to the three-room colonial structure where Orwell was born, said Debpriya Mukherjee, chairman of the George Orwell Commemorative Committee. “Later on, a museum will be built which will house the replicas of Orwell?s manuscripts and other material such as photographs, letters, diaries, etc,” he told ET.

Orwell’s son, Richard Blair, has promised support for the initiative. “I am delighted that my father’s old house is now under restoration and will be turned into a museum, a museum which will be the only one in the world,” Blair had told the Guardian.

Chanchal Kumar, Bihar’s principal secretary for art and culture, said Blair can help in the museum effort, being a member of the Gorge Orwell Archive at University College, London, whose prized possession include Orwell’s manuscripts, diaries, letters and photographs.

Blair is expected to visit Motihari once the restoration work is completed.