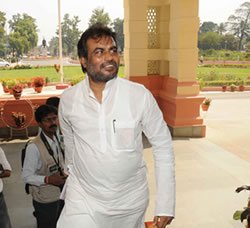 Bihar government today urged the Centre to extend the time-limit for lifting the pending quotas of grains for the March-June time period for implementing the Food security legislation to August-end. State Food and Civil Supplies Minister Shyam Rajak has written to Union Food and Consumer Affairs minister Ramvilas Paswan requesting him to extend the time till August 31 after Paswan had directed the state to lift the grains of the past months immediately. In his letter to Paswan, copies of which have been provided to the media, Rajak has stated that with the monsoon setting in, possibility of flood could not be ruled out which might affect the movement of trains carrying grains. The plan to lift the pending grains has already been worked out with FCI in Bihar, he has also written.