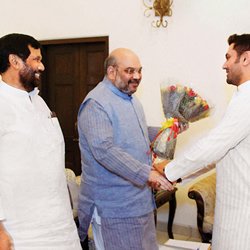 The BJP-led NDA seems to be preparing for a faceless battle in Bihar with the party leadership likely to project a “collective leadership” in the run-up to the elections, barring any last minute change in strategy.

Though party leaders have been evasive on the leadership issue saying the question of projecting a chief ministerial candidate will be left to the BJP Parliamentary Board, there is acknowledgement in the party that putting up a face could stir a hornet’s nest bringing to the surface the fissures within and alienate voters from other sections.

The BJP had fought Maharashtra, Haryana, Jharkhand and Jammu and Kashmir without projecting a chief ministerial candidate and formed governments in all these states, a party leader said. The absence of a face would mean that the election would revolve around the performance of Nitish Kumar, the Janata Parivar’s chief ministerial candidate, versus that of the Narendra Modi government.

While the BJP-led NDA, comprising Ram Vilas Paswan’s Lok Janshakti Party (LJP), Upendra Kushwaha’s RLSP and former chief minister Jitan Ram Manjhi, is banking on the upper caste, dalit, Koeri and mahadalit vote, party leaders claim there was a large chunk of voters who have gone beyond caste politics and would back the alliance ruling at the Centre.

After a meeting with BJP president Amit Shah on Saturday, Paswan said the NDA will campaign jointly in the state and the seat-sharing issue will be decided when elections are declared.

A BJP leader said the NDA’s strategy would factor in targeting the aspirational class which had moved out of caste politics and was looking for a better life. This class wants a decisive government which would not be at loggerheads with the Centre, the leader said.

However, faced with the Nitish Kumar-Lalu Prasad Yadav combine, which was banking on the Kurmi, Yadav and Muslim vote, the BJP is not leaving any stone unturned to fight the Bihar election. BJP sources said the party had the highest number of Yadav MPs.

BJP President Amit Shah will be in Patna on June 21 to attend the function to celebrate International Yoga Day. He had also been there on Ambedkar’s birth anniversary on April 14. On Sunday, six union ministers will be in the state to attend assembly level conferences.