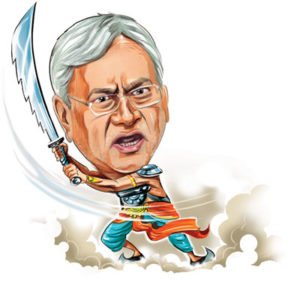 In Maharajganj village on the border of Ara and Buxar districts, some adults, their cattle and their half-naked infants rest under the shade of an ancient tree after a long day of work in the fields in the peak harvest season. They seem reluctant to talk about politics — agricultural labourers, they are pre-occupied with the harvest and the earnings.

A week before the Buxar Lok Sabha went to polls on April 17, Ramji, who tills land, told dna, “In 2009, the entire village voted for JD(U). The Bihar government has done a good job, but most of the ‘good job’ seems to be on paper only.”

In the course of the discussion, Ramji pointed to a primary school and said, “This is what Nitish Kumar has given us. This building was dilapidated. But we need more than buildings. Teachers and regular classes are lacking.”

In hushed voices, the villagers, predominantly belonging to the backward classes, also express their frustration with corruption in implementation of schemes as one of the primary reasons of people’s disillusionment with the Nitish government.

In Sandesh, 40km away in the Ara parliamentary constituency, villagers vouch for the work done by the Nitish government but say that it is corruption that will turn the tables against Nitish. Here too, the dilapidated school building has been given a touch up, but a lack of teachers and corruption in scholarship distribution cast a shadow on the structure.

Similarly, the road that connects Ara to Sandesh is in a bad condition, and travellers end up spending one-and-a-half-hour to cover the short distance. Despite the chief minister’s work, JD (U)’s outgoing MP, Meena Singh, is unlikely to retain his seat.

“No new school buildings have come up, but the earlier dilapidated schools are now up and running. Though there is lack of teachers,” said Arvind Kumar Singh, a teacher at Madhyamik Vidyalaya in Sandesh. “Six of us teachers attend to over 700 students, and our school has become a high school now. Despite the good work by Nitish, the upper caste is upset with him and the people’s focus is on BJP’s PM candidate Narendra Modi.”

Nitish’s advisor Pawan Varma told dna that the chief minister is among the few people who has taken a strong stance against corruption. “Corruption is being dealt with at the lowest level,” said Varma, referring to Nitish’s decision to attach properties of erring officials.

On the political front, Varma said, “Nitish Kumar is a lambi race ka ghoda (in politics for the long run).”

Sociologists, meanwhile, say that Nitish’s political fate hinges on how far the backwards will come out to cast their vote as Nitish’s policies have mostly benefit them. “Extremely backwards, mahadalits, pasmanda Muslim, women constituency, among others have also seen improvement. Theoretically, the numbers are on his side. But whether they come out to vote, will be able to vote or not is the question,” said sociologist Saibal Gupta of Asian Development Research Institute.