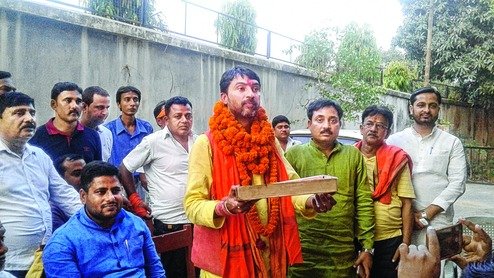 Bhagalpur: Union minister Ashwini Kumar Choubey’s son Arjit Shashwat has accu-sed Nathnagar police of fabricating false charges against BJP workers to save its skin for failure to control criminals who engineered the events of March 17.

He accused the Bhagalpur administration of keeping the state government in the dark to hide its inefficiency at checking the Nathnagar incident.

Arjit was talking to journalists following his release from jail on Wednesday afternoon after 11 days. Seven other co-accused in the case, who too were released, were with him.

“We had taken out a procession to create awareness about VikramSamvat (new year day in the Hindu calendar),” Arjit said. “There were a sizable number of women and members of the minority community. In the evening we organised a cultural programme at Sandis compound followed by a health check-up camp on March 18. Bhagalpur district magistrate and deputy inspector-general (DIG) of police spoke to me over phone. But, on March 19 we read in the newspapers that Nathnagar police had implicated us.”

Arijt rubbished charges by a social group that CDs containing provocative songs were distributed in Bhagalpur and elsewhere during Ramnavami to whip up passions. “It’s part of a conspiracy by the Congress-RJD to tarnish my image among people of one community,” Arjit said. “The Bhagalpur administration failed to understand this. The administration’s intension is clear when one goes through the two FIRs.”

He expressed faith in chief minister Nitish Kumar and deputy chief minister Sushil Kumar Modi but said the Bhagalpur administration had kept them in the dark. “When my anticipatory bail was rejected I called up the police to say I was ready to surrender in Patna, but they are claiming they arrested me,” Arjit said. “There are many such instances.”

He said he has written to Nitish and Sushil and will now meet them. “I’ve filed a case in Patna High Court to quash the Nathnagar FIR,” he said.

Pranav Das, another accused, could not be released on Wednesday because he would have to take bail in another FIR against him. He was found taking a selfie with someone while being produced in court.

Regular bail petition of Anup Lal Das, another accused, was not moved yet, so he, too, could not be released from jail.