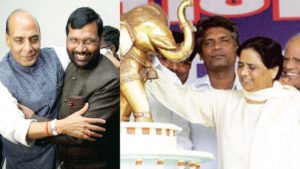 On the eve of the 2014 Lok Sabha elections, Dalit politics is poised on the cusp of a devastating dilemma – either join the mainstream political parties and risk losing one’s identity or fight it out alone and risk losing power. Either way, the Dalit agenda – the assertion of the subaltern identity – loses out in the long run.

Perched on such a precipice, Dalit leader from Bihar and president of the LJP, Ram Vilas Paswan did a somersault and formed a pre-poll alliance with the BJP. The Ramdas Athavale-led Republican Party of India (RPI) in Maharashtra had similarly poll-vaulted across the political spectrum and joined the NDA in Maharashtra. The Buddhist Dalit leader Udit Raj, president of the All India Scheduled Castes and Scheduled Tribes Federation, had also joined the BJP-led alliance.

In contrast Mayawati, whose BSP was routed in the recent Assembly elections in Madhya Pradesh, Chhattisgarh, Rajasthan and Delhi, has decided to take the risk and go it alone by forming direct alliances with the communities and castes by providing tickets to the aspirants under the BSP umbrella. Which strategy will pay-off in the longer run will be decided in May.

For the time being, let us zero in on Hajipur, Paswan’s (Reserved) constituency, from where he has won the Lok Sabha election eight times. Situated at the confluence of the Ganga and the Gandak, Hajipur, which is the headquarters of Vaishali district, has been represented by Paswan since 1977. Paswan won the Hajipur seat with a record margin in 1977 and 1989. Barring 1984 and 2009, he has won here every time. Since the LJP won none of the seats it contested in 2009, the ‘secular camp’ of the Congress and the RJD tried to cold-shoulder Paswan. As a result, the LJP has rebuffed the two allies by entering into a pre-poll alliance with the BJP in Bihar, according to which the LJP will contest seven Lok Sabha seats from Bihar, including Hajipur.

All of a sudden, his detractors – the Congress, RJD and the Janata Dal(U) – have begun labeling Paswan as a “turncoat” and an “opportunist”. But the truth is that Paswan is one of the most pivotal players in Bihar politics. For psephologists, he is a political weathercock, who has an uncanny knack to pick out the leading political trends.

Switching allegiance is not an easy option since there are grave risks involved with each somersault. Lalu Prasad suffered from such a suicidal strategy, when he contested the 2009 polls without forging an alliance with the Congress and was reduced to just four seats. Bihar Chief Minister Nitish Kumar seems to be paying the enormous price of his latest poll-vault since he seems to be out of the political reckoning in the Lok Sabha polls after severing ties with the BJP. Is Paswan tired of the switches he has to make in politics from one political alliance to the other? Paswan answers the question by talking about the three dilemmas confronting the Dalit leaders and parties:

Dilemma one: “The spread of Dalits all over India is such that by themselves they are always in a minority. In any election, Dalits can only benefit if they enter into an alliance with another social group, one of the dominant ones.”

Dilemma two: “In the case of the Dalit political parties, either ally with the mainstream parties for power and risk losing one’s identity or go it alone and risk being ousted from power.”

Dilemma three: “Dalit parties end up faring badly in Reserved constituencies compared to mainstream parties, which in a way defeats the very purpose of seat reservations.”

Paswan has fought the constraints of such a cruel dilemma by joining hands with the other communities and allying with parties across the political spectrum. Paswan explains the philosophy of his core strategy by using the metaphor of a human palm. “Consider the palm of a hand, how all the four fingers and the thumb synchronise with each other and maintain a good grip, so do social groups, including Dalits, maintain social harmony in society by allying with others.”

Baba Saheb Ambedkar faced such a dilemma in the first polls in 1952 when he contested as a  candidate of the Independent Labour Party. Later, his followers from the RPI, too encountered similar dilemmas. As a result, the RPI in Maharashtra splintered into several outfits and was almost marginalised for several decades. Recently, the Athavale faction of the RPI joined the BJP for the sake of its sheer political survival.

BSP leader Mayawati faced a similar dilemma in UP and also the other states of the Hindi heartland, where the BSP tried to make political inroads. Mayawati confronted the dilemma head-on by evolving her own unique brand of the two-track Dalit strategy. First, she entered into an alliance with all the mainstream political parties–in the initial years with the SP, thrice with BJP and later on with the Congress.

“Mayawati could afford such a strategy because her core caste– the Jatavs– has an advantage in terms of numbers. The Jatavs constitute the majority (56 per cent) of the Dalit votes in UP and together with the Dushads (Paswans) constitute almost three-quarters of the Dalit votes in Bihar. In fact, the Jatavs comprise almost one-sixth of the votes in several states in the Hindi heartland.”