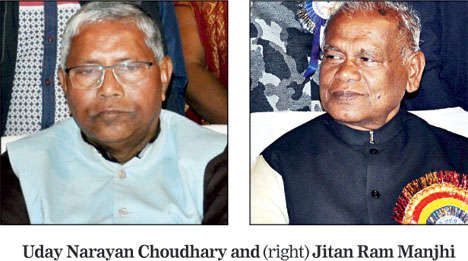 Patna: The Opposition is organising yet another event in the state to consolidate Dalits against the BJP and its alliance partner, the JDU.

This comes at a time when the BJP is trying very hard to counter the Opposition’s attack on the Dalit issue.

This time the lead has been taken by former Speaker Uday Narayan Choudhary, who is estranged from his party, the JDU, at present.

Choudhary, who hails from the Dalit community, is going to organise a Dalit-Muslim Unity conference in Patna on June 24 as part of his effort to consolidate Dalit and Muslim voters against BJP and its alliance partners.

Recently, another Dalit leader from Bihar, former chief minister Jitan Ram Manjhi, whose party the Hindustani Awam Morcha Secular has now become a part of the Grand Alliance after breaking away from the National Democratic Alliance (NDA), had organised an event to which Dalits had been invited.

Earlier this month, even Muslim organisations had organised a conference in Patna at which the Narendra Modi government came up for severe criticism.

Justifying his plan to organise a programme to ensure the unity of Dalits and Muslims, Choudhary told The Telegraph on Tuesday: “Dalits and Muslims are feeling threatened these days. Efforts are being made to frighten them. Also, efforts are being made to end the reservation facility given to deprived sections of society. The programme aims at giving a message to both the communities that they would have to remain united in order to safeguard their rights.”

The JDU came up with a sharp reaction to the former Speaker’s move to organise the protest programme.

“Such leaders don’t do anything for their communities when they are in power,” JDU spokesperson Niraj Kumar said. “Recently, Jitan Ram Manjhi organised a similar programme after which his son got a seat in the Legislative Council with the support of the RJD. Now, Uday Narayan Choudhary wants to promote his political career by organising the event.”

Niraj also dared the former Speaker to “tell participants about the number of massacres that took place during the rule of his newfound ally (read RJD) in Bihar”.

Also, Niraj added, “Choudhary ji should come up with a comparative figure about the amount spent for Dalit and Muslim welfare in Bihar during RJD rule and that by the government of Nitish Kumar.”

The Dalit problem erupted last month after the apex court issued guidelines to protect public servants and private individuals from arbitrary and immediate arrest under the Scheduled Tribes (Prevention of Atrocities) Act.