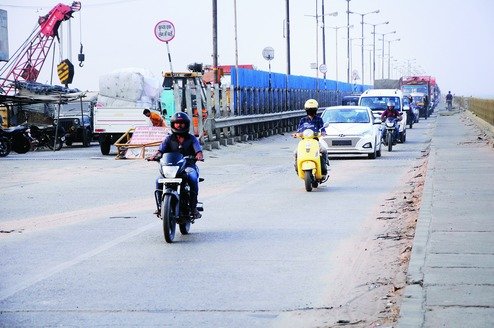 Patna: The plying of heavy vehicles on the 5.575-km-long Gandhi Setu may be stopped until the repairing is completed.

The road construction department has written letter to the district magistrates of Patna and Vaishali to give their suggestions citing the reason that the Setu has become dangerous due to overloading and heavy vehicles need to be stopped on an urgent basis.

The road construction department has asked chief secretary Anjani Kumar Singh to take the final decision on the matter. A present, the western flank of Gandhi Setu has been completely closed and even two-wheelers are not allowed.

Road construction principal secretary Amrit Lal Meena told The Telegraph: “I have written the letter to the Patna DM (Kumar Ravi) and Vaishali DM (Rajiv Roshan). We also need to involve the Saran and Bhojpur district administrations as vehicles also take the Ara-Chhapra bridge. I will fix the date with the chief secretary so that all four district magistrates can give their suggestion to find out the alternative. We need to stop plying of heavy vehicles on Gandhi Setu.”

As things stand snow, restructuring of the Setu is being carried by the ministry of road transport & highways which has selected AFCONS-SIBMOST JV to execute the project. The rehabilitation work entails dismantling the Setu superstructure and replacing it with a steel structure.

It is being restructured at a cost of Rs 1,382.40 crore and the date of completion of the project is May 18, 2020. At present, the agency is dismantling the western flank of the Setu and it is expected to be ready by December 2018.

There is a pontoon bridge as well parallel to Gandhi Setu. However, it only caters to light vehicles and heavy vehicles still use Gandhi Setu.

Meena said: “As only one flank is functional, the load on Setu has increased due to which it has become dangerous. However a suggestion has come that heavy vehicles should be allowed only from 10pm to 4am and not in the day time. But no decision has been taken yet as the suggestion is still under consideration. The final decision would be taken by the chief secretary.”

On an average, more than 10,000 heavy vehicles pass through the dilapidated Gandhi Setu and altogether at least 50,000 vehicles cross the bridge. Due to opening of the new JP Setu across the Ganga (Digha-Sonepur rail-cum-road over bridge), the load from Gandhi Setu has been transferred but heavy vehicles are not allowed.

The road construction department is thinking of allow plying of heavy vehicles on JP Setu and Patna traffic superintendent of police P.N. Mishra has written a letter to the Patna and Saran DMs to allow trucks to ply over the JP Setu from 11pm to 6amto curb traffic snarls over the Mahatma Gandhi Setu.

Meena said the road construction department has written a letter to the DMs after NHAI, regional officer, Patna, A.K. Mishra raised the issue that load on Gandhi Setu has increased and so an alternative must be found on an urgent basis.