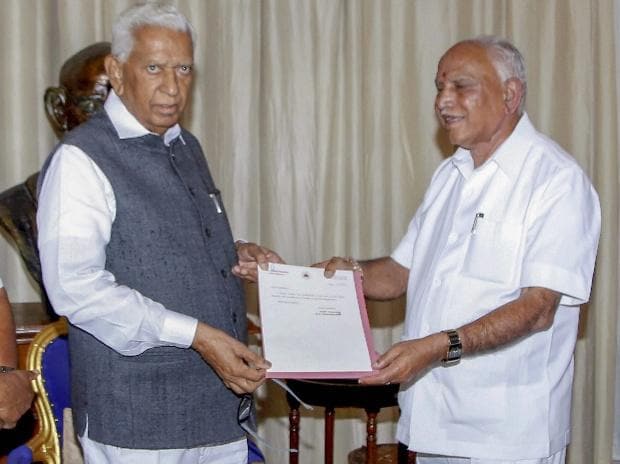 The drama surrounding the swearing-in and eventual resignation of BJP’s B S Yeddyurappa in Karnataka may have been an embarrassment for the BJP, but it was probably a bigger loss of face for the position of the Governor of the state, Vajubhai Vala. The opposition parties sought the intervention of the Supreme Court in the matter, which led to a sharp reduction in the number of days provided to Yeddyurappa and BJP to prove their majority in the house.

The Governor came in for strong criticism from both political parties and political commentators for his partisan role. He was accused of ignoring the fact that the Congress-JD(S) post-poll alliance had the requisite numbers while the BJP was short. The appointment of the pro-tem speaker by the former finance minister of Gujarat, Vala also came in for censure. The Supreme Court asked the letter handed over by Yeddyurappa to the Governor to be produced before it in order to ascertain whether he had the requisite numbers or not. The letter was eventually found to be vaguely worded without any mention of the numbers in support of the BJP.

However, this was not the first time that the Governor’s office faced such criticism for its actions. State governors appointed by the Union government have had a history of courting controversies especially when it comes to government formation in a hung house.

Here is a list of occasions when the role of the Governor faced criticism:

1952 (Madras): It was the first time when the governor office was accused of acting inappropriately after independence. Governor Sri Prakasa invited C Rajagopalachari to form the Congress government in Madras, despite the fact that Gopalachari was not an elected member of the assembly and had not participated in the then elections.

1970 (West Bengal): Three years later, the discretionary power of the Governor was misused again in West Bengal. In March 1970, Ajoy Ghosh of the United Front government resigned as CM, thereafter, CPM leader Jyoti Basu staked claim, assuring he would prove majority, but the then governor Shanti Swaroop Dhawan ignored the demand, and imposed President’s rule in the state.

1984 (Andhra Pradesh): In the year 1983, under N T Rama Rao, Andhra Pradesh got the first non-Congress government, but an year later, when NTR went to the US for heart surgery, his finance minister Nadendla Bhaskara Rao, a former Congressman broke the party and staked claim as CM. He was supported by Governor Ram Lal and was made the Chief Minister.

1988 (Karnataka): Governor P Venkatasubbaiah did not give opportunity to Karnataka Janata Dal Chief Minister S R Bommai to prove his majority in the assembly, despite, Bommai presenting him the copy of resolution signed by the legislature party.

1996 (Gujarat): CM Suresh Mehta of the BJP faced rebellion from Shankar Singh Vaghela and 40 other MLAs. Post-defection, Governor Krishna Pal Singh ordered Mehta to prove his majority in the Vidhan Sabha. The government succeeded in proving its majority, but Pal sent the report to the then PM H D Deve Gowda, recommending President’s Rule in the state.

2005 (Bihar): Governor Buta Singh recommended dissolution of Bihar assembly in 2005, despite the JD(U) and the BJP claiming that they fulfilled the requirements of forming the government with the support of 115 MLAs in the 243 member house, but Singh tried his best to not allow the NDA to form the government.

2005 (Jharkhand): Governor Syed Sibtey Razi installed Jharkhand Mukti Morcha’s Shibhu Soren as the new CM, despite the NDA claiming the support of 41 MLAs in the 80 member assembly. The matter reached Supreme Court which ordered a floor test. Soren failed to prove his majority in the house and BJPs Arjun Munda was sworn in as the CM of the state.

2010 (Karnataka) In September that year, the B S Yeddyruppa government faced rebellion from 16 MLAs. Speaker K G Bopiah called for the floor test and disqualified the rebel MLAs from the Karnataka Assembly. Consequently, Yeddyurappa proved his majority through a voice vote. The Supreme Court later came down heavily on the Speaker’s actions. The Governor H R Bhardwaj questioned the manner in which the majority was proved and sent a letter to the President recommending President’s rule. The Union government rejected his suggestion.

2017 (Goa): In the year 2017, no party won a clear majority in the Goa state assembly elections. Congress emerged as the single largest party winning 17 seats in the 40 seat assembly. However, Governor Mridula Sinha, invited the BJP to form the government.

2017 (Manipur): Here again, in the 60 member assembly, Congress emerged as the single largest party winning 28 seats, however governor Najma Heptullah invited BJP first to prove majority and later BJP cobbled together 4 MLAs from National Peoples Party, 4 from Naga Peoples Front and one from Trinamool Congress to form the government with BJP’s Biren Singh was sworn in as Chief minister of the state.

2018 (Meghalaya): Here too the Congress lost another state despite winning more seats than any other party in the elections. In the 50 seat assembly, the Congress won 21 seats, followed by NPP 19, and BJP and UDP, two and six, respectively. However, governor Ganga Prasad invited Conrad Sangma of the NPP to prove his majority. Sangma’s NPP formed the alliance with UDP, PDF, HSPDP, and the BJP to form the government in the state.