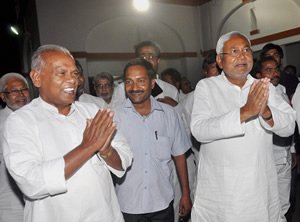 Patna: Former CM Nitish Kumar on Saturday said the Jitan Ram Manjhi government was running on the broad agenda set by him for governance. Addressing the first meeting of the new JD (U) state executive, he said he has nothing to do with the working of the government as he has decided to devote himself to strengthening the party.Nitish said the party organization and the government should work independently, but there should be coordination between the two. He advised the party leaders to bring back those who left JD (U) due to some misconception. On his part, Nitish said, he would visit different districts from September to revitalize the party.He said the party got 18% of the total votes polled in Lok Sabha election despite a misinformation campaign by rival parties and leaders. Five party spokesmen were asked to reorganize the media network and appoint spokesmen in the districts too. The spokesmen should read newspapers and see news channels regularly and make appropriate comments on behalf of the party without delay. “Media should be informed about the party views on different issues,” Nitish told the office-bearers.They were asked to have a uniform opinion on an issue and avoid making confusing statements. Like the BJP, the JD (U) has also appointed eight organizing secretaries. Like in BJP, the JD (U) organizing secretaries have been directed not to appear before the print or electronic media or on public platforms. They have been asked to strengthen the party in different districts and organize district-level conferences next month.

JD (U)’s district units would also be reorganized this month, according to Ajay Alok, a spokesman of the party. He told TOI the former CM said no leader should approach him for work in the government. They should better directly talk to his successor.He said without consulting the state party president, no leader is expected to issue any statement. Bashistha Narain Singh has been authorized to issue official statements or depute any one of party spokesmen. Bashistha has been asked to organize training camps for the party workers at different district headquarters to prepare the party for the assembly elections next year.