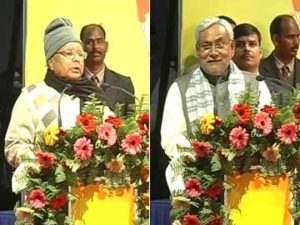 Patna: Nitish Kumar today confirmed that he will contest by-elections for 10 seats in Bihar in partnership with one-time enemy Lalu Prasad Yadav. Mr Kumar made the announcement in his first address to the party workers since quitting as chief minister in May, accepting responsibility for the party’s crushing defeat in the national elections, where it just won just two of state’s 40 parliamentary seats.“The time has come to stand united and we’ve to forge an alliance based on our understanding and common principles to take on NDA at the Centre and state level,” Mr Kumar said in his address.The by-elections will be held next month. Nitish dumped BJP last year ending the 17-year-old alliance, and paid huge price for it. BJP swept the state in the national elections.Mr Kumar and Mr Yadav were both prominent young leaders of the Janata Party through the 70s. In 1997, Mr Yadav formed his own RJD. Mr Kumar helped form the JD(U) in 2003.In 2005, Mr Yadav’s wife, Rabri Devi, was chief minister of Bihar – he had been forced to resign over corruption charges. Mr Kumar’s alliance with the BJP evicted the Lalu-Rabri government; in 2010, Mr Kumar was re-elected chief minister for a second term and his party governed Bihar in partnership with BJP till the divorce last year.Mr Kumar and Mr Yadav collaborated a few weeks ago to ensure two JD(U) candidates were elected to Rajya Sabha.With state elections due next year, the by-polls that are coming up are an important temperature check for parties.BJP hopes to make gains. BJP leader Sushil Kumar Modi, who was Mr Kumar’s deputy Chief Minister, told workers to go to the people and tell them to give pyjama in the form of mandate at the state level as they’ve already given kurta in the form of mandate at the Centre.